BT claims that its commercial £2.5 billion fibre programme is about 18 months ahead of its original schedule, and is on course to pass about 19 million premises by the end of spring 2014.

As shown in our figure below, BT has been making excellent progress with its commercial roll-out programme, with a noticeable uplift in the last quarter, and looks to be on course to reach 19 million premises (which equates to about 66% of UK premises by the end of March 2014) – which would actually be ahead of its latest accelerated plans. 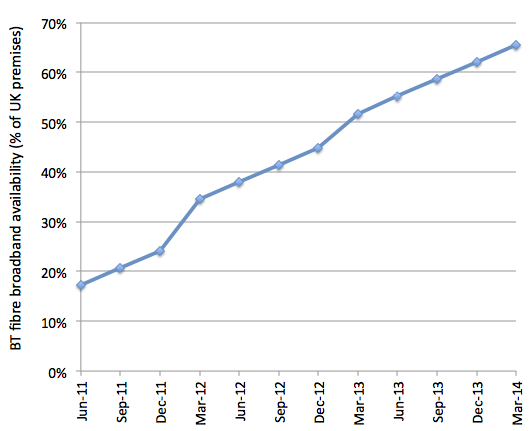 It is important to note that, as well as deploying fibre as part of its commercial roll out, BT is also working with councils and local authorities to take fibre to areas outside the private sector’s current and projected footprint. BT has already signed 18 BDUK contracts and hopes to sign further BDUK-related deals in the coming months. These additional deployments are not included in the fibre availability chart above. We believe that these projects will increase the availability of high-speed fibre broadband to 90% (or even more) of UK premises by the end of 2015.

So, within less than three years, the vast majority of premises will have access to fibre broadband. While the progress on fibre infrastructure roll-out looks very promising, statistics on the actual take-up of fibre services are less positive, although it is still early days for superfast broadband.

As shown in the chart below, take-up of BT fibre broadband has been increasing. In its results for the quarter to the end of December 2012, BT reported that take-up is “growing strongly” with around 1.25 million homes having access to fibre broadband services. However, this still equates to less than 10% of the 13 million homes that could access fibre broadband. 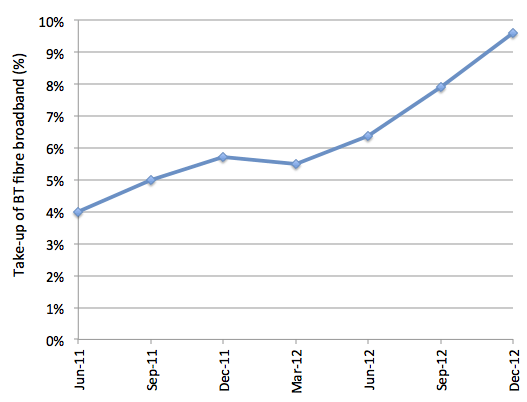 Take-up of BT fibre broadband in the UK

Now that extensive roll-out of fibre broadband is well underway, we believe that should be an increased focus on demand stimulation for superfast broadband services. Availability is not enough and, ultimately, adoption is a much more important measure of success. From the perspective of the UK Government and local authorities, the greater the take-up of BT fibre broadband services, the stronger the commercial case for fibre broadband deployment becomes without the need for public investment.

We believe that too many people in areas already covered by fibre broadband are:

To address these, we have developed a range of information pages on this website.

Many broadband users make the assumption that superfast broadband services are considerably more expensive than conventional broadband. However, this is not the case, as found by Ofcom in its recent report.