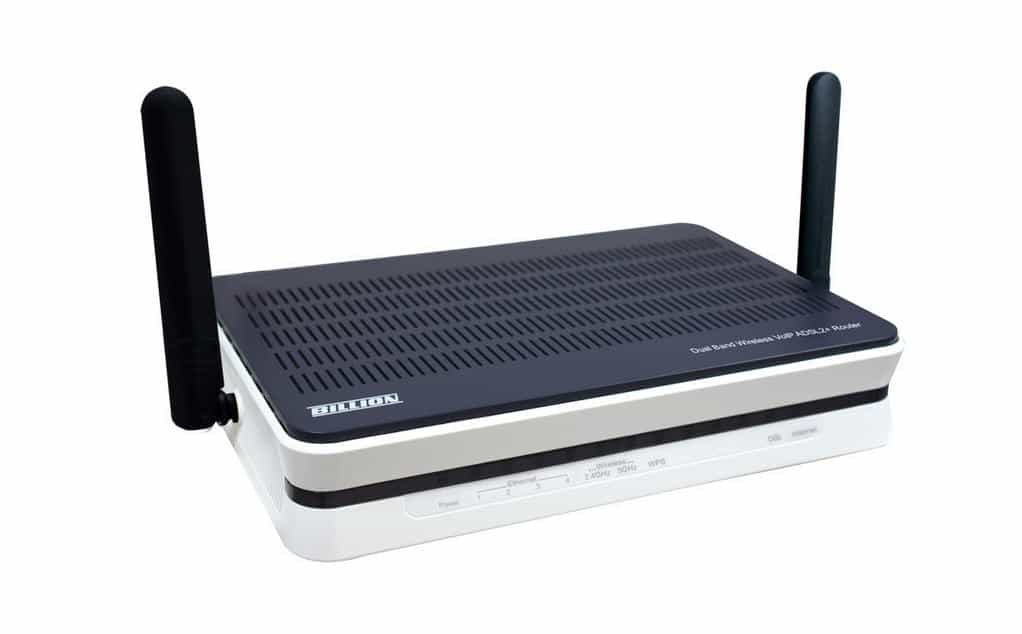 Enhancing the specification of the previous Billion 7800N, the Billion 7800DXL is recommended for anyone trying to squeeze out the very best speeds from their ADSL line. It improves on the 7800N’s robustness with challenging broadband lines and enhances its target Signal-to-Noise Ratio (SNR) margin adjustment feature. Furthermore, the Billion 7800DXL adds significantly improved functionality, including comprehensive performance statistics and dual-band (2.4 GHz and 5 GHz) wireless operation.

Please note that the 7800DXL incorporates a modem for conventional ADSL (and ADSL2+) broadband but does not incorporate a VDSL2 modem for fibre broadband. If you think you may want to upgrade to fibre broadband in the future, you may wish to consider the other choices discussed in our Which Broadband Modem Router? page.

The Billion 7800DXL has firmly addressed key niggles with the Billion 7800N. While the 7800N is still available, we believe that the new 7800DXL is well worth its price premium and we have no hesitation in recommending it as a great upgrade to the 7800N.

This page provides information on how to optimise the settings of the Billion 7800DXL to get the best speeds, for example by using target SNR margin tweaking. If you would like to buy the Billion 7800DXL, then please consider doing so through this Amazon Billion 7800DXL link, as the small commission helps to fund this site while you pay the same great price. Thank you.

When the Billion 7800N was introduced, it was at the cutting edge as an ADSL/ADSL2+ modem with its robust Broadcom chipset, innovative target SNR margin adjustment feature and Gigabit Ethernet LAN. Regular readers of online forums will know that the Billion 7800N has developed a special following among enthusiasts trying to squeeze out the very highest speeds from their broadband connections.

Times move on, and Billion introduced the new Billion 7800DXL to the UK, enhancing the specification, and we have been provided with a unit to independently review.

The Billion 7800DXL comes packaged in an impressively large box, giving the impression of a premium product. The Billion 7800N would never win a beauty contest. It is in the form of a rectangular all-white plastic box with lots of holes for ventilation and looks very ‘functional’. Opening the packaging reveals that the 7800DXL retains the same basic design as the 7800N, although a combination of dark and white plastics are used, which give the 7800DXL a more contemporary feel.

Ensure you are using the latest firmware

Let’s get straight to it, and discuss what’s different about the 7800DXL so that you can decide whether it’s worth purchasing it (or upgrading from the 7800N). After testing the 7800DXL for a few days, we can confirm that the 7800DXL:

These aspects are now considered in turn.

Enthusiasts will be delighted to know that Billion has continued to focus on providing the best core modem performance for ADSL/ADSL2+ lines, with an updated Broadcom chipset and the continued support for target SNR margin adjustment (although this is set in a different way to the 7800N).

The modem provides a broadband user with unmatched control of an ADSL/ADSL2+ connection to get the best performance in terms of speeds and reliability. Performance maximisation is achieved through easy manual adjustment of the operating mode, target SNR margin tweaking and the availability of detailed connection statistics.

Easy adjustment of the operating mode

As detailed in our Increase Broadband Speed Guide, every line is different and it is not always possible to predict which operating mode – basic ADSL (G.Dmt), ADSL2 or ADSL2+  – will yield the very best speeds and line stability. If the 7800DXL is left in its default setting, the operating mode is selected automatically. However, manual selection can potentially improve the speeds and stability.

We always recommend, if possible, that you try each available operating mode in turn to see which one gives the best results for your line. While users connected to ADSL equipment in the exchange can only select basic ADSL (G.Dmt), users connected to more modern ADSL2+ exchange equipment (also known as ’21CN’) have the choice of three operating modes – conventional ADSL (G.Dmt), ADSL2 and ADSL2+ (which uses twice the frequency range of ADSL and ADSL2 and can, therefore, deliver higher speeds on shorter lines). Many people do not realise that it is possible to select basic ADSL on a line connected to ADSL2+ equipment in the exchange.

On the Billion 7800DXL, it is very easy to select the operating mode manually in the ‘Configuration’ ‘WAN’ ‘DSL’ submenu. Here you simply tick the modulation types that can be used by your modem. Ticking only one option will force the modem to use that particular mode so that you can test its performance.

Don’t assume that ADSL2+ always delivers the best performance. On our particular line (some distance from the exchange), we have found that ADSL2 gives the best all-round performance and is more reliable than ADSL2+.

It is immediately noticeable on the 7800DXL packaging that Billion is being much more forthright about target SNR margin tweaking and “SNR adjustments to achieve highest sync speeds” is now proudly emblazoned on the box. Furthermore, target SNR margin adjustment is now contained within the standard menu of the modem – and can be accessed from the ‘Configuration’ ‘WAN’ ‘SNR’ submenu (as shown below).

While the target SNR margin adjustment feature makes the 7800N perfect for those seeking the fastest download speed, it is rather surprising that the connection statistics provided on the 7800N are rather basic. In the 7800N’s  ‘Advanced’ ‘ADSL Status’ submenu, only the following information is provided:

Thankfully, Billion has decided to provide a much more comprehensive set of statistics with the 7800DXL. The line statistics can be found in the ‘Status’ ‘Statistics’ ‘xDSL’ submenu. A whole range of statistics is provided, including HEC errors, error seconds and information on interleaving (as shown below). This is a major step forward since detailed performance statistics can help broadband users diagnose issues with their connection. 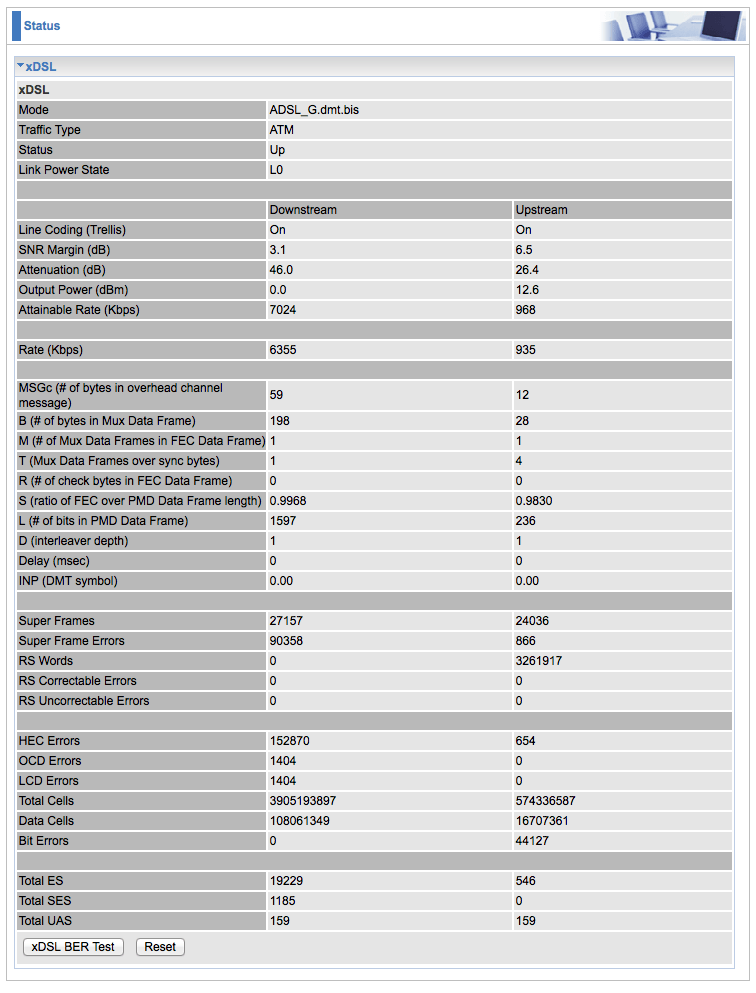 Don’t get confused by the ‘Mode’ indicator on the xDSL Status page. On this page, the Billion modem reports a longer (rather confusing) mode description than the shortened one used in the DSL Configuration menu. So, for example, when the modem indicates ‘ADSL_G.dmt.bis’ (as in the screen shot above), this actually means ADSL2!

Niggles addressed by the Billion 7800DXL

Some users of the Billion 7800N do not find the menus and set up to be intuitive. In particular, there are confusing ‘Save Config’ and ‘Restart’ buttons in some menus that can leave even the most technically-savvy people flummoxed. Seemingly, different set up options require different buttons to be pressed. While you can generally work out the correct sequence in the end, it’s very easy to forget how to set things up when you haven’t used the menus for some time.

Furthermore, when changes are made to menu settings in the 7800N, the modem often reboots itself with the message “Since settings are changed, the router will reboot to make the changes take effect! Please wait for seconds.” Inevitably, each time the modem reboots, the DSL connection is dropped.

The 7800DXL thankfully does away with the ‘Save Config’ option so you are left with an ‘Apply’ option once you have tweaked the relevant settings, making things much simpler. While the 7800N reboots after changes are made, the 7800DXL generally does not reboot so changes are much quicker to make.

When the 7800N was introduced, its wireless specification was strong, offering 40 MHz channel support at 2.4 GHz to deliver a claimed maximum link speed of 300 Mbps (although real-life throughputs are generally substantially lower than this).

With an ever-increasing number of homes and businesses using WiFi, the potential for interference in the 2.4 GHz band is generally significant. It is, therefore, pleasing to see that 5 GHz operation has been added to the Billion 7800DXL since this frequency band is often less crowded.

Billion has very usefully added a ‘Scan Used Channel’ button (shown below) in the advanced wireless configuration menu. This provides a textual indication of which channels have been detected from nearly access points (for example, used by neighbours) so that you can avoid choosing these frequencies to minimise interference. 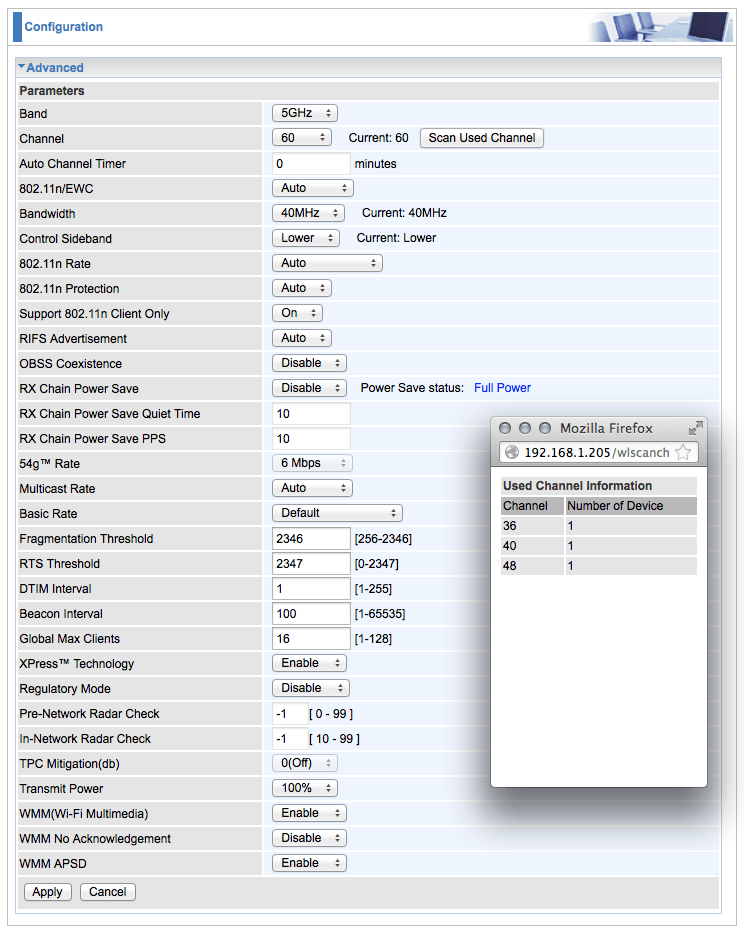 The 7800DXL also allows a guest WiFi network to be configured.

Our tests revealed that the 7800DXL provides good range and throughputs at both 2.4 GHz and 5 GHz, with the fastest throughputs achieved at short range using the 5 GHz band.

When we connected our Macbook Pro to an Apple Extreme base station (which is clearly designed to optimally support Apple devices), a 450 Mbps maximum link speed was achieved.

Comparison of maximum link speeds is generally of limited value given that real throughputs can be substantially lower, particularly when located well away from the router. If you want to achieve high wireless throughputs across a home or office, we always recommend investing in additional wireless access points.

Despite the obvious usefulness of WiFi – for example, to support mobile and tablet devices – we strongly recommend that you connect any devices, if possible, directly to the router via an Ethernet cable, particularly fixed PCs and set-top boxes. This will provide the fastest and most reliable connection for these devices and minimise the traffic that has to be carried via WiFi.

The 7800DXL does not support the very latest 802.11ac wireless standard. Given the relative lack of 802.11ac compatible devices currently available, this does not seem to be a deal breaker.

Billion has added another useful feature to the 7800DXL – bandwidth monitoring, which can be accessed from the ‘Status’ ‘Bandwidth Usage’ submenu. Both WAN and LAN connections can be monitored. The screenshot below shows the received level of WAN traffic (using one ADSL2 connection) over time. Where there are multiple connections displayed (for example, LAN inputs) each connection is displayed in a different colour. 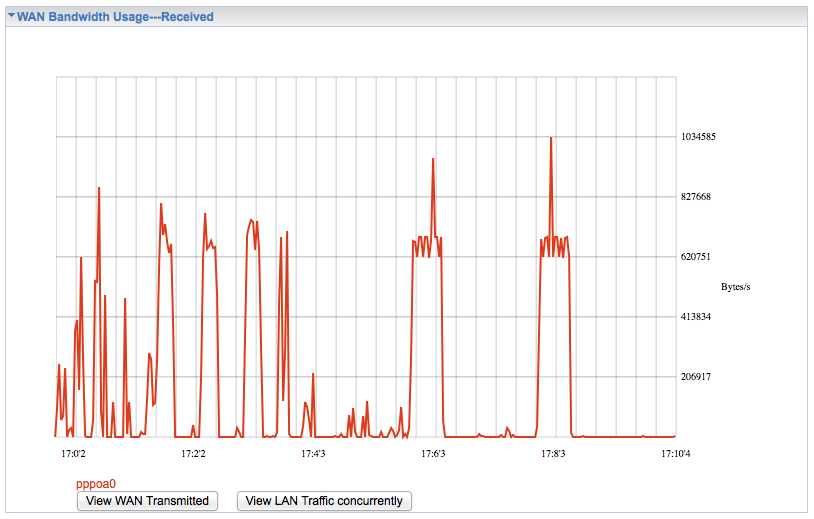 The 7800DXL is not a load balancing router

While (relatively expensive) routers from some other manufacturers (for example, DrayTek) offer relatively sophisticated load balancing features for multiple WAN connections, the Billion 7800N has only offered very basic ‘auto-failover’ for its WAN inputs. There has been no step change in functionality with the 7800DXL, which also offers auto-failover rather than advanced load balancing. Billion is clearly targeting the 7800DXL at Small Office/Home Office (SOHO) and home users where sophisticated load balancing is not required.

For the vast majority of users, we suspect that load balancing features would never be used, and it is much more important fore Billion to focus on the core capabilities of the modem, which it has clearly done. Those needing load balancing always have the option of purchasing a separate load-balancing router and just using the 7800DXL as a (particularly robust) modem.

Other features of the Billion 7800DXL

While we have focused this review on the aspects of the 7800DXL that are critical to achieving the very highest speeds from a broadband connection, here is a list of the key features of the modem/router from Billion for completeness:

Conclusion – our modem of choice

If you’re looking for the very best modem router to squeeze out the very best speeds from your ADSL or ADSL2+ line, then look no further. With its killer combination of the latest Broadcom chipset, target SNR margin adjustment and comprehensive line statistics, the Billion 7800DXL is our ADSL/ADSL2+ modem of choice. It’s a great upgrade for 7800N users. Please visit our Which Broadband Modem Router? page for our very latest equipment recommendations.