This page shows a range of broadband statistics from a range of sources that show the current state of broadband in the UK. Sources include Ofcom, BT and Virgin Media. This page is updated regularly to track the roll-out and take-up of superfast and ultrafast broadband services.

According to Ofcom, superfast broadband services offering predicted download speeds of at least 30 Mbps were available to around 95% (28.058 million) of UK homes and offices by May 2019. Only 8% of premises (2.486 million) had access to full fibre services (Fibre to the Premises).

According to Ofcom, rural areas fare worse than urban areas for availability of high-speed services. While superfast broadband (30 Mbps+) was available to 95% of UK premises, only 77% of premises in rural areas were able to access download speeds of at least 30 Mbps in May 2019. 10% of premises in rural areas (0.427 million) were unable to achieve 10 Mbps or higher. Demonstrating that progress has been made, this had decreased five percentage points compared with the previous year (May 2018).

Take-up of superfast broadband is significantly lower than availability

Take-up of superfast broadband lags behind availability, which suggests that consumers are not all aware that superfast services are available in their area, or that they perhaps do not see the benefits of upgrading or think it is expensive.

In its Connected Nations report (published in December 2008), Ofcom found that “people do not always sign up to faster broadband packages when they are available”. Although at the time 94% of premises had access to superfast broadband (30 Mbps+), only 45% had signed up to them. Ofcom stated, “People should be given the choice to sign up to a fast broadband service but may not choose to do so for different reasons, for example where the slower service is sufficient for their needs or because the faster service is too expensive.”

By September 2019, 75.8% of BT’s consumer base subscribed to superfast broadband (>30 Mbps). While this is up 7.4 percentage points in a year, it is still significantly lower than availability.

For reasons to upgrade to faster broadband services, visit:

Why Do You Need Superfast Broadband?

Switching broadband supplier or recontracting with an existing supplier saves money, according to Ofcom

Interesting snippets from Ofcom’s ‘Media Use and Attitudes’ report, published in May 2019:

Below are some useful snippets from BT’s latest results (for the quarter ending September 2019): 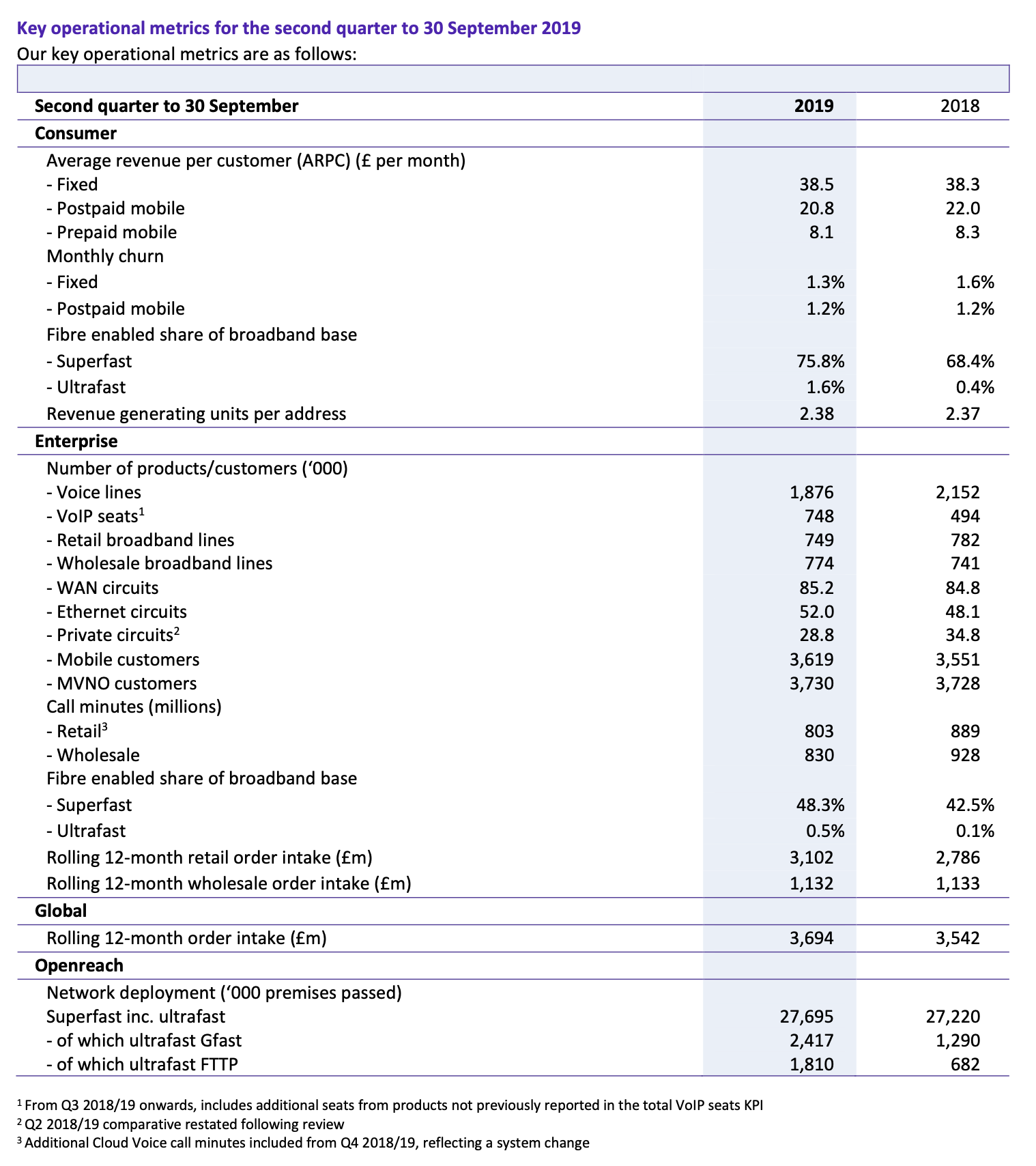 Below are useful snippets from Virgin Media’s latest results (for the quarter ending September 2019):