Go back to page one of our Sharedband review (Introducing Sharedband)

If you would like to order the Sharedband service, please do so via this Sharedband information and ordering page. This will generate a small commission to help cover the costs of running this site.

Setting up the Sharedband service was easy

Before we started our test of the Sharedband service, we had two individual ADSL lines and, for each, we were using the robust Billion 7800(N) modems. Our main line was provided by Xilo, with the secondary line provided by Talk Talk (and we were subscribing to the Plus service). Both lines were relatively distant from the exchange and had similar line characteristics and performance, with a downlink line loss of about 50dB (as measured by the Billion 7800N). Through the use of filtered faceplates and SNR target margin tweaking, both lines were  able to reliably sustain connection rates of between 6.2 and 6.8 Mbps (with a target SNR margin of about 3 dB), with throughputs in the range 5.5-6 Mbps.

As promised by Sharedband, a small package arrived on time, containing two Netgear DG834v4 ADSL routers and instructions. We were struck by how small the overall package was and the effort that had gone into making the set-up as straightforward as possible. Simple, clear instructions were provided, along with all the necessary cables.

As an initial configuration, we connected the routers to each other using the Ethernet cables provided, as described in the set-up instructions. We connected a PC to one of the LAN ports of one of the Netgear router modems. As instructed, we logged into each individual router, and entered the appropriate ADSL username and password (provided by our ISP) for the particular connection. Set up could not have been more straightforward and we had the service up and running in under two minutes.

The two Netgear DG834v4 modems successfully connected (with default 6 dB target signal-to-noise ratio margins). Downlink connection speeds were about 5.6 Mbps and 6.0 Mbps, with an uplink connection speed of about 1 Mbps for both modems. These connection speeds are what we would expect, although they were lower than those achieved with our normal Billion 7800s (due the SNR margin tweaking that we perform with the Billion modems). 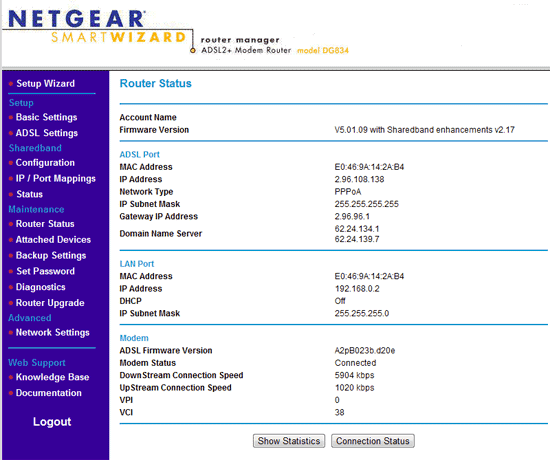 First impressions of the Sharedband service were very positive

First impressions were very favourable, with excellent performance ‘out of the box’. An online speed test (www.mybroadbandspeed.co.uk) reported a download throughput of just under 10 Mbps, with an upload throughput of about 1.65Mbps!

Nothing prepares you for the sense of elation from seeing significantly better speed test results than you have ever experienced previously. While a load-balancing router may do its job effectively when there are multiple users on a network, seeing unchanged speed test results is somewhat disappointing.

In contrast, we were delighted to see the speed test dials reach much higher numbers. While users of superfast broadband services reading this review may not fully understand the sense of excitement, there’s a tremendous feeling of empowerment when you can achieve decent speeds despite being a long distance from the exchange.

While there is a tendency to focus on download speeds, it is important not to forget the substantial improvement achieved in upload throughputs. As we regularly upload large files to the Internet, we really appreciated the significantly reduced uploading times.

Before going much further, we want to emphasise that to get the very best out of the Sharedband service, you need to use the best individual connections that you can.  So, we strongly recommend that broadband users apply the techniques in our Increase Broadband Speed Guide, for example, fitting a filtered faceplate for each individual line.

Since an optimised broadband connection can often deliver twice the download throughputs of an unoptimised line, optimising poor, unreliable broadband connections should be the first priority before considering ADSL bonding. Furthermore, if you choose to bond ADSL connections after optimising the individual lines, you will be able to achieve the very best throughputs. For all of its clever technology, the Sharedband service cannot create an amazing bonded connection from two or more highly-unreliable connections.

As described in our SNR tweaking page, we are keen proponents of  SNR target margin adjustment (to maximise broadband speeds). This can make a huge difference to broadband users stuck with a 15 dB target margin set by BT exchange equipment, given than many lines can reliably operate with an SNR target margin of about 3 dB. Significant speed benefits can also be achieved with LLU services. For example, TalkTalk set an initial 12 dB target margin for all new customers, which can safely be reduced by many users to increase download speeds.

Given the sense of achievement that we would feel breaking through the 10Mbps download barrier, we investigated whether it would be possible to tweak the SNR target margin of the Sharedband Netgear DG834v4 ADSL routers.

In its non-amended form, the Netgear DG834v4 has proved a highly-popular router modem, and it has received a great deal of attention from broadband enthusiasts keen to extract the maximum performance from its Broadcom chipset.  It is possible to tweak the standard Netgear DG834v4 using a telnet connection. However, when we tried to connect to the modem using telnet, we received an error message.

After raising a support ticket, we received a quick reply to say that telnet was switched off by default. However, we were provided with a method for re-activating it so that we could apply the SNR margin tweak.

After doing this, we were successfully able to communicate with the routers by typing the following commands into Windows Command Prompt:

We then issued the following commands in each router: 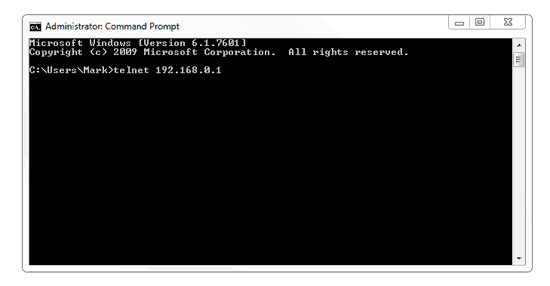 This had the immediate effect of reducing the target SNR margins of both modems from their default values of 6 dB to 3 dB.

The modems automatically reconnected at higher speeds, and we re-ran the speed test that we had performed initially. We had achieved a download throughput of well over 10 Mbps, as shown below! We were really delighted. At this rate, with four lines, we would be nearly able to reach 25 Mbps – the ‘official’ definition of superfast broadband. How’s that for a village in rural Cambridgeshire?

As the telnet method is rather cumbersome, and tweaks do not survive modem reboots, it would be great to see an SNR tweaking capability incorporated within the Sharedband firmware to give users greater control over individual ADSL connections (and to ensure that settings are applied consistently and survive a modem reboot).