Use our online speed test

Below is our online speed test, provided by Ookla, which we believe is the most accurate online tester available based on extensive measurement. In major part, this is due to its use of many geographically-distributed servers, which allows you to run a test on a server that is located physically close to you. 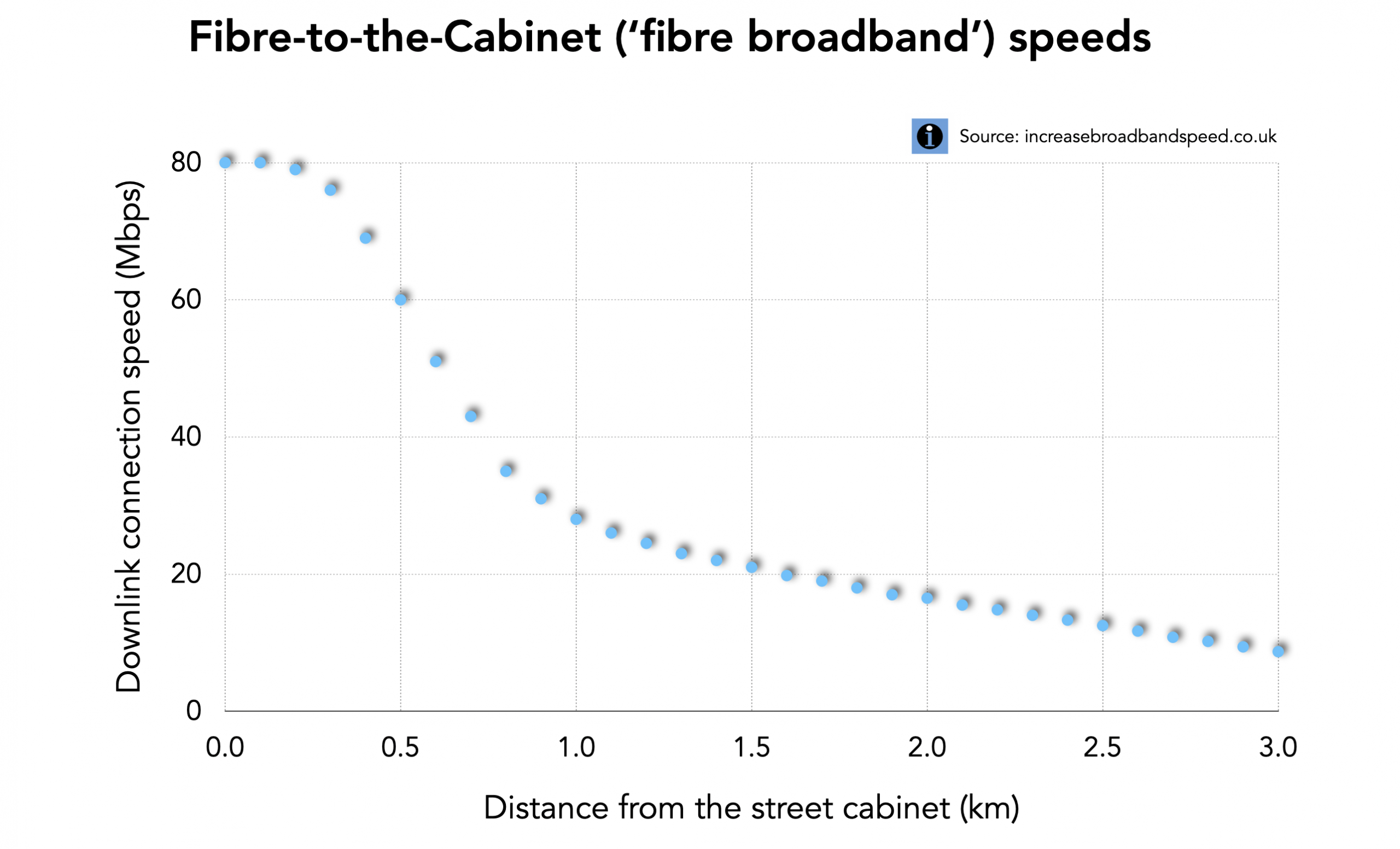 Similarly, as described in our article entitled Chart of ADSL and ADSL2+ Speed Versus Distance, the speeds of conventional ADSL2+ and ADSL broadband decline with distance from the BT exchange. Only premises situated within 1 km of the exchange are likely to achieve a downlink connection speed close to the maximum possible.

When talking about speeds, many ISPs refer to the connection speed (or “sync speed”) of a broadband connection. So, depending on what fibre broadband subscription you have, this can be (depending on the service chosen) up to 80 Mbps or 40 Mbps in the downstream direction. The connection rate is the speed at which your router communicates with the DSLAM equipment (situated in the exchange for ADSL and ADSL2+ or your fibre street cabinet for VDSL2 fibre broadband).

It is important to realise that because of the way the broadband system and the Internet have been designed, the actual throughput of your connection (i.e. the real speed for the applications that you use) will be lower than the connection speed. Firstly, there is an overhead in getting the IP packets from the ISP to your modem, which is reflected in the so-called “IP Profile”. Secondly, IP packets don’t only contain useful ‘payload’ information and also contain headers about the information sent. As shown in the table below for VDSL fibre broadband, the real throughput (for example, measured by an online speed test) will be significantly lower than the connection speed.

IP Profile is 96.69% of the connection speed for lines enabled with G.INP

How to run an online speed test

Before discussing the best online speed tests that are available, it is important to consider the conditions in which you should run an online test. When you run a speed test, there are a number of issues that could cause the online speed test to measure a lower speed than the actual throughput of your connection, so you should take the following precautions:

Based on extensive measurements, OOKLA (once configured correctly, as will be explained) provides consistent and relatively accurate results. OOKLA claims to be “the world’s most popular Internet speed test” with millions of tests per day. OOKLA provides global coverage, with speed tests available from more than 10,000 servers worldwide.

It is critically important to select the most appropriate server, and it may take several attempts to determine the best server available. When you run an OOKLA online speed test, a server is automatically selected. We have found on numerous occasions that the server selected is not necessarily the best available and can give inaccurate results for a number of reasons (including the server being overloaded). You have the opportunity to pick an alternative server, and you should try a range of servers that are relatively close to your location. Over time, you will probably discover that a particular server (even if it not one of your closest servers) provides the highest and most consistent results. Ensure you select this server every time you run an online speed test. 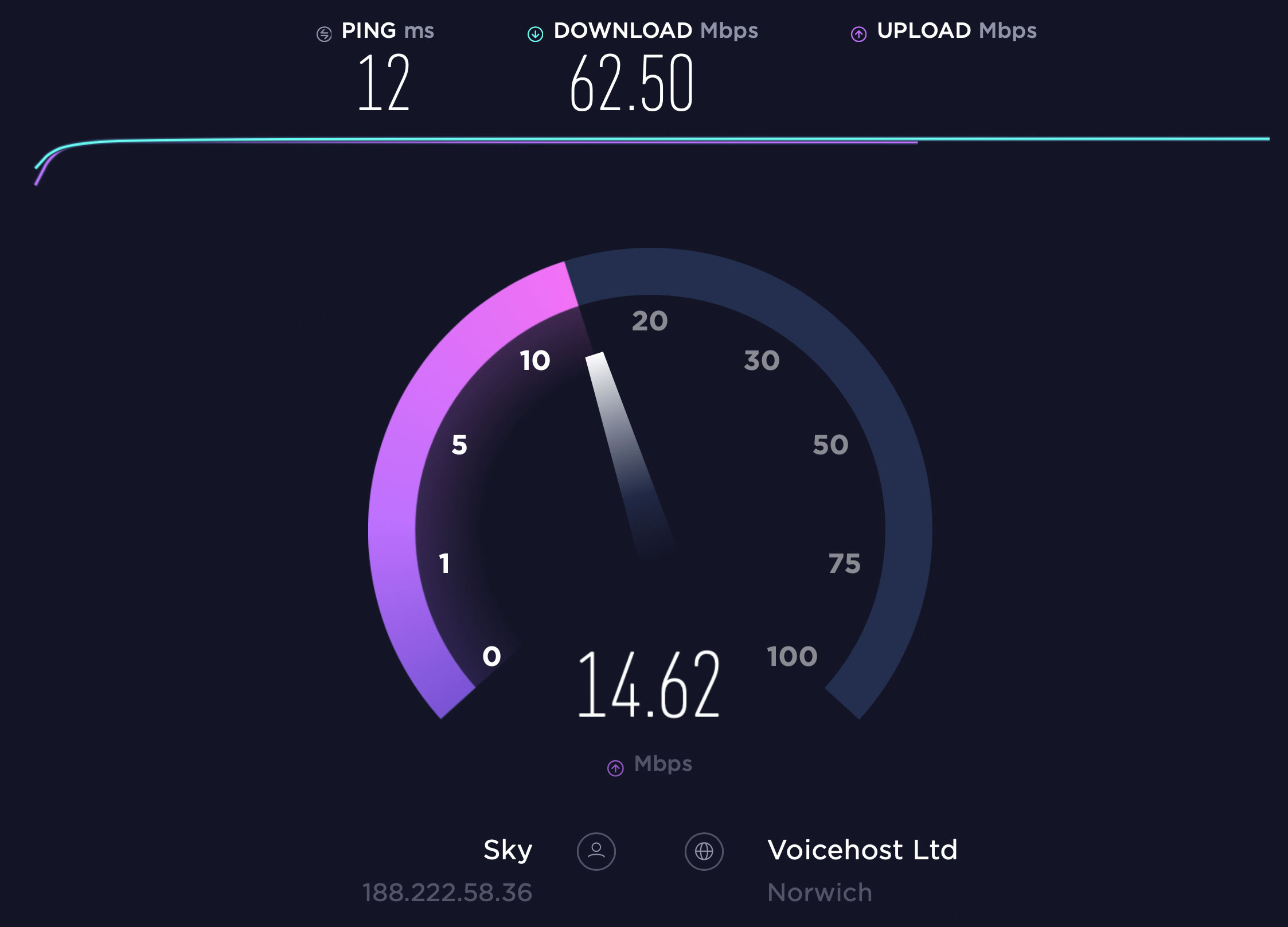 While it is easy to get carried out with download (and upload) speeds, it must be remembered that, for many services using the Internet, latency (time delay) and jitter (variability in delay) affect certain services much more than speed. These include online gaming, voice-over-IP and video-over-IP services (such as Zoom and Skype) and browsing. Many online broadband speed tests provide a measurement of (and display of) ping, and some provide a jitter measurement. However, most of these measurements are completely pointless because the measurement server is not situated close enough to make the measurement meaningful. Overly-high ping measurements are an indication of the inadequate infrastructure used by the speed test provider rather than reflect the true performance of your own broadband connection. Please don’t get misled.

As long you are using a server that is geographically close to you, we’ve found that the Ookla tests gives a reasonable measurement of ping.

Ping spikes caused by bufferbloat can wreak havoc with a broadband connection, as described in our article Bufferbloat: Why It is Harming Your Broadband and How to Easily Fix It. This is the common phenomenon where services such as Netflix, YouTube and file downloads and uploads cause huge ping spikes in a network that massively degrade latency-sensitive applications such as web browsing, online gaming and voice and video conferencing/telephony. We are sure the online gamers among you recognise this well!

DSL Reports offers the most comprehensive measurement of bufferbloat that we have found among online speed tests. The speed test continually checks latency from the start to the finish of the test, not just at the beginning (like most other speed tests). If the latency rises substantially during the download or upload section, this indicates a high degree of bufferbloat when the connection is fully loaded. Usefully, DSL Reports provides a grade for bufferbloat, allowing you to assess your connection.

While we used to rate the BT Wholesale Broadband Performance Test highly for accuracy and useful additional information about your broadband connection, BT has clearly changed how it works, and it’s not good news. Quite frankly, the new test is the biggest pile of garbage we have ever seen, and provides completely inaccurate results. Please stay well clear of this tester. Results are nowhere close to reality.

In our extensive tests, the BT Wholesale consistently measured our download speed to be about 66 Mbps (yes you read that right) more than it is.

Sorry not to end the article ‘on a high’, but it just goes to show that online speed tests are not all the same and many are misleading, primarily because they use inadequate infrastructure. As long as you are careful, however, some online speed tests can give relatively accurate results.

Your Wi-Fi could well be the bottleneck in your broadband connection. Use our WiFi Optimisation Guide to ensure you get the fastest speeds possible.