“What is a good signal level or signal-to-noise ratio (SNR) for Wi-Fi” is one of the most common questions in online forums. Typical answers are along the lines of “SNRs of 24-40 dB are considered good” but they do not explain the compromise in speeds you are potentially making due to the adaptive modulation and coding built into Wi-Fi technology. For the best Wi-Fi speeds, signal strengths of -50 dBm or greater or signal-to-noise ratios of 41 dB or greater are necessary. In a typical residential property, we show, using real-life measurements, that these targets are perfectly achievable, but generally only with multiple Wi-Fi Access Points rather than a single Wi-Fi router. Furthermore, the use of a single Wi-Fi router increases the chance of ‘not-spots’ – locations where absolutely no Wi-Fi service is possible. However, with modest planning and measurement, you can dramatically improve your Wi-Fi network and maximise speeds where you want them.

If you want a laugh, pop over and have a read of the websites of most Wi-Fi equipment manufacturers. With claims of massive speeds (such as 11,000 Mbps from the latest products), it’s no wonder that so many broadband users are disappointed when speed tests reveals speeds of only 1% or less of these claims. We cannot think of another area where performance claims exceed the reality experienced by broadband users by such an extent.  The reality is that Wi-Fi speeds achieved in ideal radio conditions drop substantially in poorer conditions.

Up to now, the low broadband speeds achieved with basic broadband services have often masked poor Wi-Fi speeds. With a move now towards ultrafast broadband services, and with broadband usage expected to triple in the next five years, you need to ensure that your Wi-Fi network keeps ups. BT’s latest Full Fibre 1000 service offers download speeds up to 900 Mbps but a quick glance at Internet forums reveals many subscribers moaning that their own speed tests indicate real speeds much lower than this – due primarily to Wi-Fi. We believe that it’s pointless upgrading to ultrafast broadband services with very high speeds if your Wi-Fi network is not properly configured and optimised. Wi-Fi can only deliver the best speeds that it is capable of when the radio conditions are excellent, as described below. Fortunately, actions to dramatically improve your Wi-Fi speeds are straightforward.

Wi-Fi modulation and coding explained in a nutshell

Wi-Fi has been designed to cope with the challenges of radio wave propagation in typical buildings – where signal levels can rise and fall dramatically depending on your location with respect to your Wi-Fi router or Access Point. In general, signal levels fall as you move away from the Wi-Fi router or Access Point, and signals can be significantly attenuated as they travel through obstacles, such as walls, ceilings and doors.

One of the most important features of Wi-Fi is the system used for ‘coping’ with signal strength variability. The fundamental purpose of this is to maximise data rates wherever possible (when signal levels are excellent), while making Wi-Fi signals more robust (with slower data rates) when signal levels are poor to avoid data loss. This is called adaptive modulation and coding. Modulation and coding are different things but work together.

Modulation is concerned with how data/information is sent across the airwaves. Five modulation schemes can be used with 802.11ac Wi-Fi, depending on signal conditions. The most robust modulation scheme is called BPSK (or Binary Phase Shift Keying). QPSK (Quadrature Phase Shift Keying) doubles the data that can be sent in a certain time period but is more susceptible to noise and interference. Similarly, 16-QAM (Quadrature Amplitude Modulation) doubles the data rate of QPSK. 64-QAM and 256-QAM triple and quadruple the data rate of QPSK, respectively. Of all the modulation schemes available, 256-QAM can deliver the highest speeds, with eight times more data in a given time period than the most robust BPSK. However, it can only operate successfully when signal conditions are excellent.

Signal strength and signal-to-noise ratio explained in a nutshell

Before discussing recommended targets, it is important to explain and distinguish between the metrics that are commonly used and measured. Often the terms ‘signal strength’ and ‘signal-to-noise ratio’ are used in online forums to mean the same thing but they are different. If you want to properly set up and optimise your Wi-Fi network, we recommend that you use software designed to measure Wi-Fi networks. Our favourites are currently:

Both of these measure both signal strength and signal-to-noise ratio for all the Wi-Fi routers and Access Points in your vicinity. The screenshot shows measurements recorded using NetSpot.  Your Wi-Fi network can be set up and optimised using either measure. 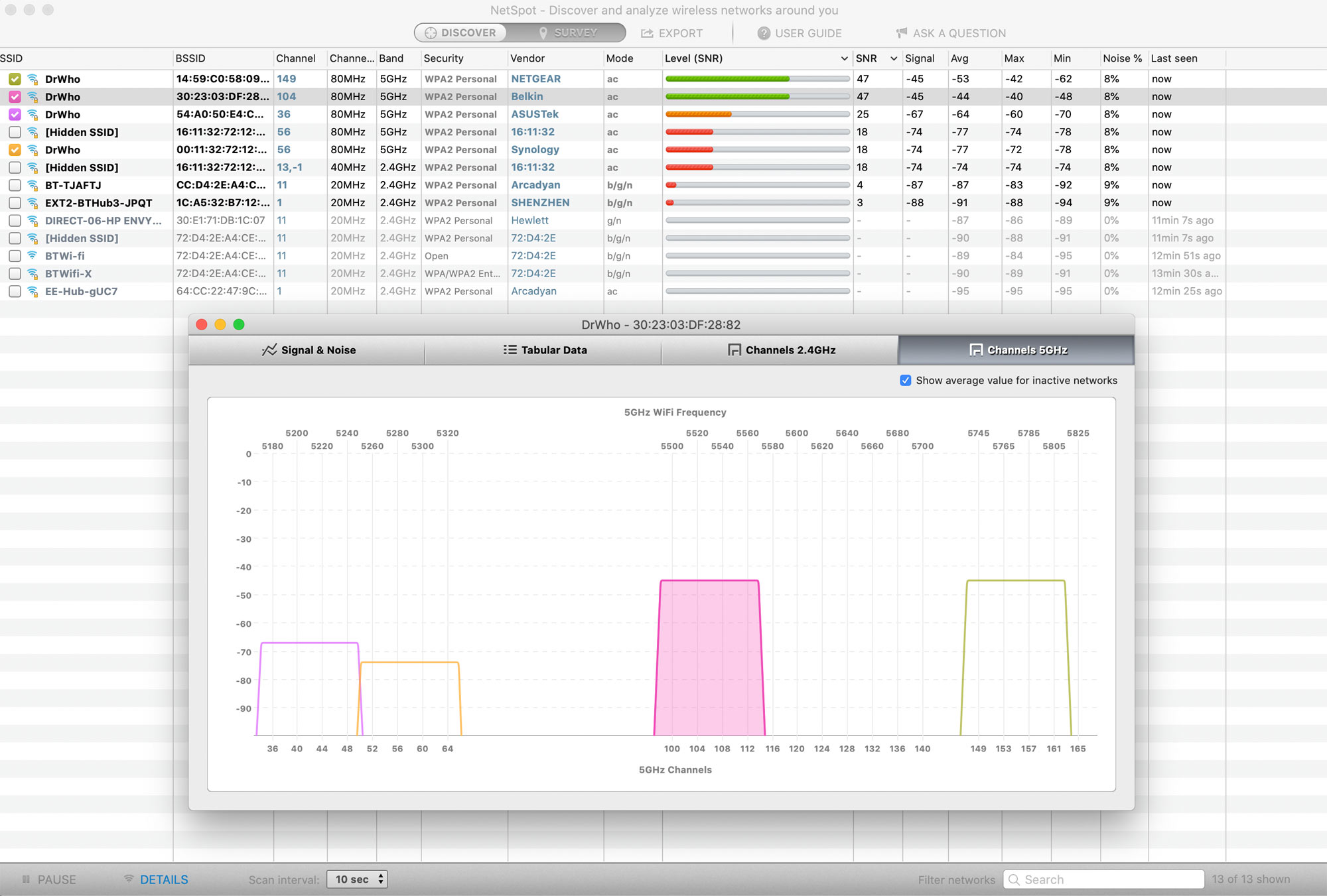 Signal strength is usually measured in dBm (which means the signal level compared to 1 mW measured on a dB scale). 0 dBm means 1 mW. -10 dBm means 0.1 mW and -20 dBm means -0.01 mW. Typically, measured signal levels are much lower than 1 mW so Wi-Fi signal strengths will be in negative numbers and will usually vary between -80 dBm (0.00000001 mW) and -30 dBm (0.001 mW). What may be confusing for some is that a smaller negative number is higher (better) than a large negative one. A signal strength of -50 dBm will only be achieved relatively close to the WiFi router or Access Point. Signal strengths of -75 dBm or lower are considered poor.

It is important to remember that Wi-Fi speeds and performance also depend on the Wi-Fi standard used, the frequency of operation and channel bandwidth used. We currently recommend:

5 GHz operation is strongly recommended over 2.4 GHz (which we actually turn off). There is, generally, less interference at 5 GHz, greater bandwidth and higher maximum speeds. While range at 2.4 GHz is generally less than 5 GHz, this can be offset through the use of multiple Wi-Fi Access Points.

In a typical home, a single Wi-Fi router or Access Point will deliver a broad range of signal strengths at different locations, possibly forcing hard decisions to be made. Giving preference to a particular location (e.g. a particular living room chair) – to maximise speeds in that location – may mean much slower speeds elsewhere, as described below.

Figure 3, above, shows why statements such as “SNRs of 24-40 dB are considered good” are so misleading. That is a wide SNR range, where the minimum level of 24 dB will only achieve a speed of about one-third of the maximum speed possible.

What this means in practice and the importance of optimally-placed, multiple Access Points

To help understand what these targets mean in practical terms, we want to share with you some real measurements made in a family house in the UK. The table below shows the measured signal-to-noise ratio (SNR) using the NetSpot application. Before measurements were performed, ten target locations were identified where residents expected to spend significant time and wanted to have excellent broadband service. Four Wi-Fi Access Points were used in order to provide excellent coverage to all the targeted locations, and signal-to-noise measurements for all locations (and to all Access Points) are shown in Table 2, below. Numbers shown in bold indicate when measurements exceed the minimum 41 dB SNR required to maximise Wi-Fi speeds (discussed previously).

Table 2: Signal-to-noise ratio (SNR) measurements made in a family home in the UK

Four Access Points were necessary in this case to deliver the target SNR to all targeted locations. Using four Access Point, all ten target locations were able to achieve a minimum signal-to-noise ratio of 47 dB, with a mean signal-to-noise ratio across all ten locations of 51 dB. With the equipment we used, average throughputs of 650-720 Mbps were achieved (measured using iPerf3) at all locations using a range of devices (using 5 GHz and 80 MHz channel spacing). The achievement of higher throughputs would have required devices supporting 4 x 4 MIMO and/or 160 MHz channel bandwidths but the devices we used did not support either of these. Bear in mind that, with a Gigabit Ethernet connection to our Access Points, it would not be possible to exceed the throughput capabilities of Gigabit Ethernet.

Substantial compromises on the number of target locations and target SNR are inevitable with a reduced number of Access Points. Obviously, the exact compromises will depend on the size and geography of your house or office, which is why we recommend performing your own measurements. However, we feel our general results are representative of many UK households.

In conclusion, we feel there are two main approaches to setting signal strength or SNR targets:

Only you can make this judgement. The targeted maximum-quality approach will ensure that your Wi-Fi network remains future-proof with the evolution towards ultrafast broadband services. If you are designing your Wi-Fi network to support an ultrafast broadband connection with speeds in excess of 200 Mbps, we strongly recommend minimum targets of -50 dBm (for signal strength) and/or 41 dB for SNR.

The performance compromise approach may result in substantial variations in Wi-Fi speeds and performance. Clearly, those with standard broadband connections or slow fibre broadband connections may be able to significantly relax requirements. However, our measurements show that, as the number of Access Points is reduced, the number of areas with poor performance increases. Any single Access Point will inevitably result in ‘not-spots’ i.e. locations where signal level or SNR are insufficient to sustain any service whatsoever, causing signal drop-outs or huge latency spikes (due to retransmissions).

Despite the fact that you can substantially improve Wi-Fi performance, we strongly recommend that you use Ethernet cables to connect fixed devices (such as smart TVs and desktop PCs) rather than Wi-Fi if you can. As well as offering superior throughputs, latency is significantly lower too. This approach will also free up Wi-Fi capacity for your mobile devices. With our optimised Wi-Fi network, we were able to achieve average throughputs of 650-720 Mbps, with an average latency (ping) of about 4 ms. As a comparison, for client devices connected by Gigabit Ethernet rather than W-Fi, we were able to achieve an average throughput of 941 Mbps with average latency below 1 ms. Ethernet provides even better speeds with 10 Gigabit Ethernet (10 GbE). We have recently upgraded our network to 10 GbE and iPerf3 indicates an average throughput of 9.90 Gbps (using jumbo frames). Cables show no sign of giving way to wireless anytime soon!