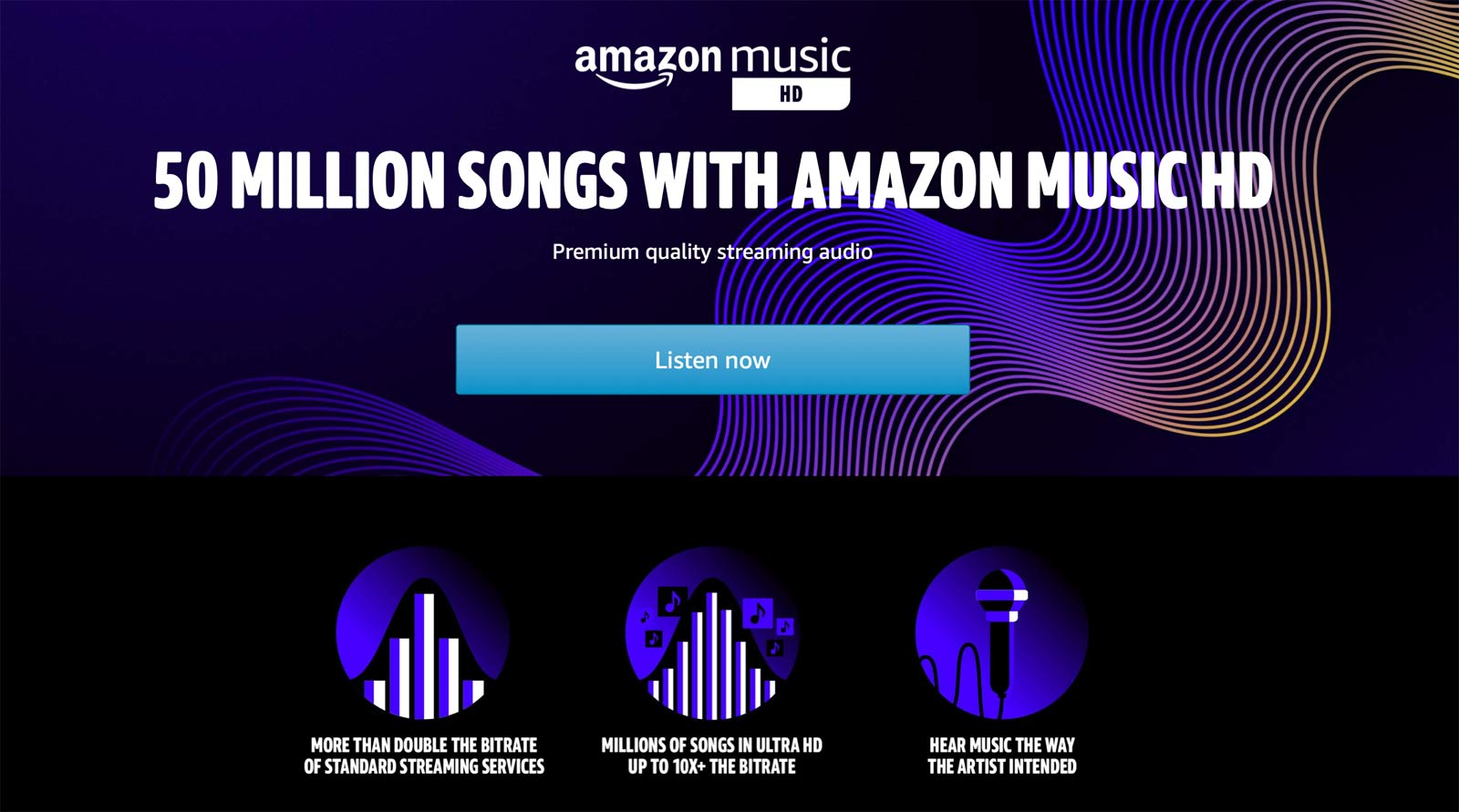 Amazon’s launch of its new Music HD service comes at an opportune moment, at a time when superfast broadband (with download speeds in excess of 30 Mbps) is available to 95% of UK homes. Say goodbye to compressed music streaming. At a relatively affordable price of £12.99 for Amazon Prime customers, it offers true-CD-quality streaming of about 50 million tracks, with “millions of songs” available in better-than-CD-quality. Now even the most dedicated audiophile will be delighted with the sound quality on offer without paying a substantial price premium for the privilege.

Superfast and ultrafast broadband are enabling an exciting range of services. While several previous articles have focused on the substantial impact that broadband is having on the delivery of TV services, this article looks at how broadband is bringing CD-quality streaming to consumers. Amazon has recently launched its new Music HD service with aggressive pricing (£12.99 per month for Amazon Prime customers) and we believe this move is set to revolutionise how CD-quality and better-than-CD-quality music is delivered and consumed.

Compact Disc (CD) was released in 1982 and was aimed at providing a high-quality storage format for music. While it certainly provided an effective way to store music with excellent fidelity, the relatively large files presented significant storage and sharing challenges given the limited storage of mobile playback devices at the time. It is not surprising that a great deal of focus was placed on the development of audio coding schemes aimed at reducing the bit rate required for high-quality audio supposedly without significantly degrading audio quality.

While reduced bit rates have certainly made it much easier to store and stream music using limited broadband connections, many audio enthusiasts have felt that audio quality with streaming services has been noticeably compromised. To address this, a number of streamed music providers (TIDAL, Qobuz and Deezer Music) are now offering streamed music with CD-quality and better-than-CD-quality. However, these services are currently priced at significant price premiums compared with their compressed counterparts. TIDAL’s high-quality service costs £19.99 per month – a premium of £10 for its CD-quality streams and its better-than-CD-quality ‘Master’ streams.  Similarly, Deezer’s HiFi service costs £19.99 per month for its CD-quality streams. Qobuz can be even more expensive on a monthly payment basis, charging £19.99 for its Hi-Fi service (offering CD quality) and £24.99 for access to higher-resolution audio.

It took the music industry by surprise when Amazon recently launched its own high-resolution streamed music service with a price of only £12.99 per month for Amazon Prime customers. This bold pricing is set to shake up the music streaming market. For a very modest monthly fee, it offers a huge choice of music (with over 50 million songs).

Music can be accessed in a number of ways, including mobile phones (with dedicated apps for Android and Apple iOS), tablets and TVs (with apps for Fire TVs and Fire Tablets) and desktop computers (with dedicated apps for Mac and Windows). The service can also be accessed on Alexa-enabled Echo ‘smart speaker’ devices. The apps seem easy to use. Amazon calls its better-than-CD-quality music titles ‘Ultra HD’ and offers a number of playlists showcasing music in this format. 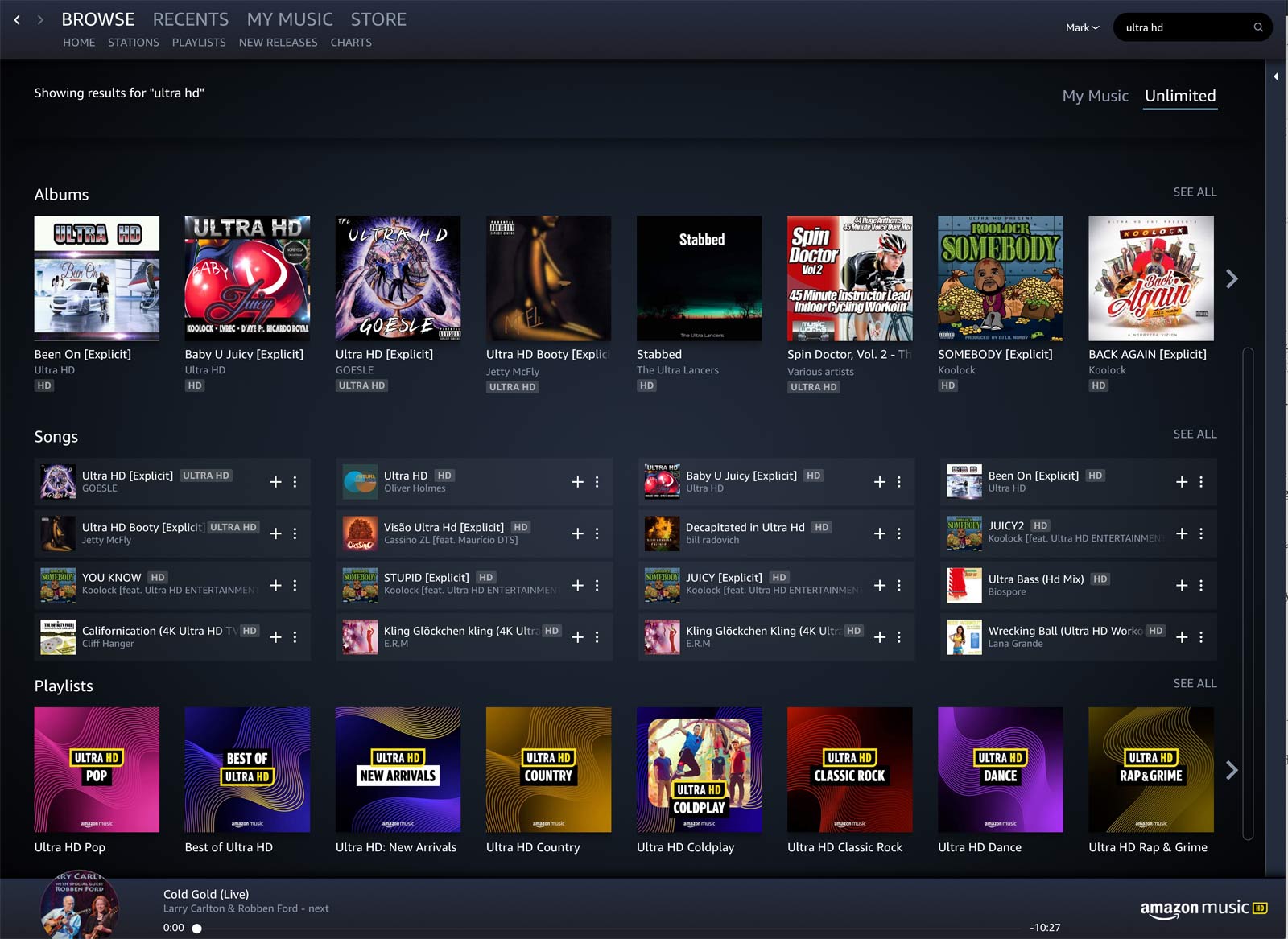 It is very easy to add Amazon Music HD to an existing hi-fi system, to replace an existing CD player for example, by using a dedicated streamer device. There are a number of excellent streamers available at different price points that are compatible with Amazon Music HD. A streamer connects to your broadband connection (via WiFi and/or Ethernet cable) and can be controlled via a mobile phone app. We have extensively tested the Amazon Music HD service with the popular Bluesound Node 2i streamer. This has recently been awarded  AV Forum’s ‘Best in Class’ award and has received widespread praise. This particular streamer incorporates an easy-to-use Apple Music HD app.

The Bluesound Node 2i incorporates a Digital to Analogue Converter (DAC) and can connect directly to the phono stereo inputs of an AV receiver or stereo amplifier – just like a CD player would. For dedicated audiophiles seeking the highest quality of music reproduction, the Bluesound Node 2i also provides a digital output allowing it to be connected to an external DAC. To understand just how good the audio quality offered is, we have extensively tested the service:

In both cases, the sound quality provided has been outstanding. It is fantastic to be able to access a huge range of music with such great sound quality, and at such an excellent price.

Amazon currently offers a free trial of its Music HD service. If you are new to music streaming, or are currently paying more for one of the other CD-quality streaming services such as TIDAL and Qobuz, we strongly recommend that you try the service for yourself. We hope that the launch of Amazon Music HD finally encourages Spotify and Apple to upgrade the quality of their music streaming services.

If you want to try the Amazon service, please click on the image below. Don’t forget to select the Music HD service for the best quality.