You may also be interested in: ‘A Perfect Planet’ and ‘Dr Who’ Demonstrate 4k HDR at Its Best in BBC iPlayer (Jan 2021).

What a pleasure it was this Christmas and New Year period being able to watch the complete series of ‘Seven Worlds, One Planet’ and ‘Dracula’ on BBC iPlayer in Ultra HD 4k quality. They looked absolutely amazing. Once you see the incredible detail, colour volume and dramatic specular highlights delivered by Ultra HD with High Dynamic Range (HDR), there is simply no going back to traditional TV broadcasts. The only downside is the BBC has not yet been able to provide the superb Dolby Atmos soundtrack that is available on the Ultra HD blu ray version of ‘Seven Worlds, One Planet’.

BBC iPlayer was launched in 2007 when broadband networks were far less developed, constraining realistic bit rates. As a handy catch-up service, iPlayer enjoyed year-on-year growth in terms of take-up and usage among licence-fee payers. With limited competition from the streaming services of other UK broadcasters (including ITV Player), iPlayer was the most popular ‘on demand’ service in the UK for many years. 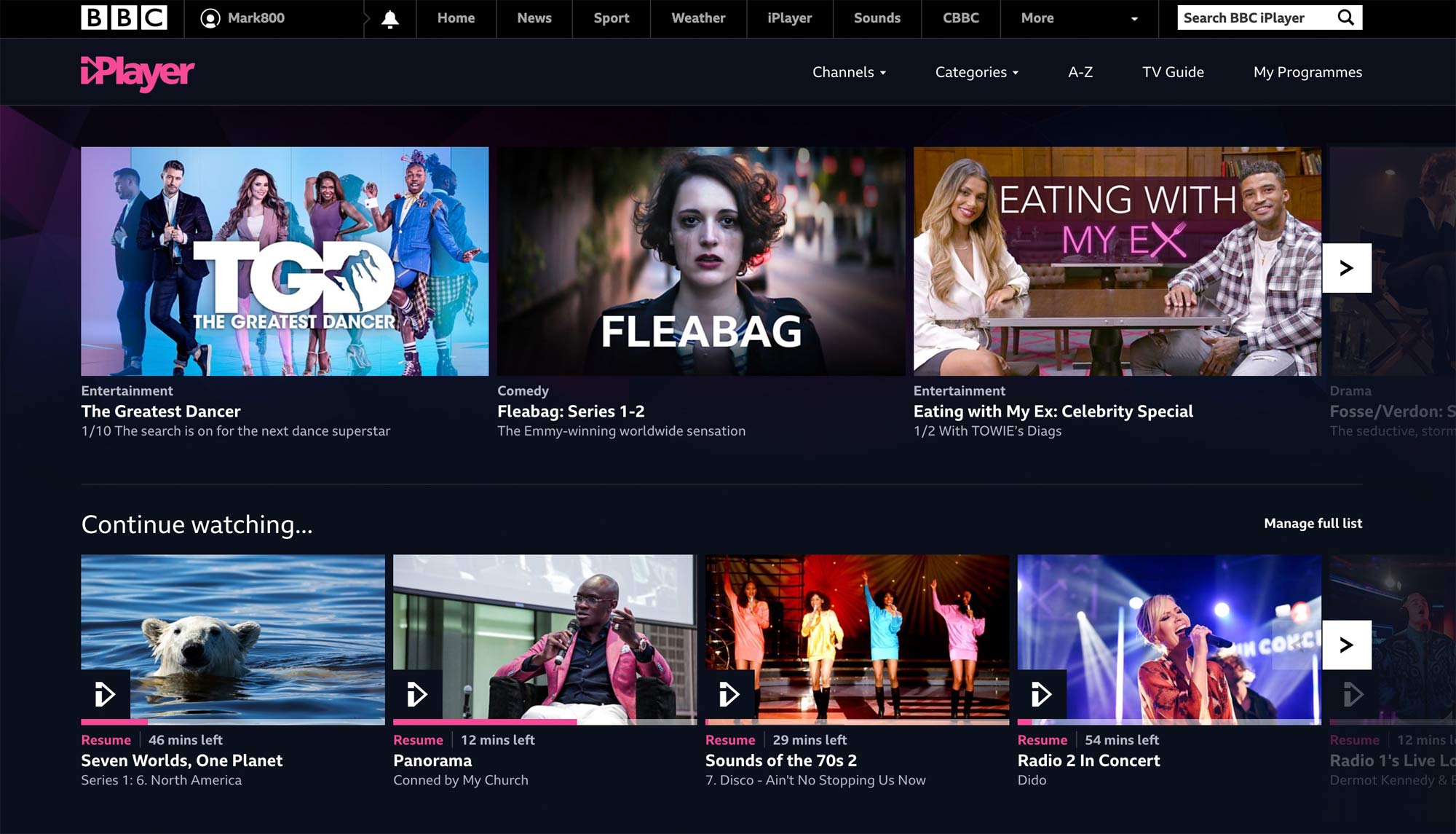 Historically, we’ve never been that impressed with iPlayer, and have preferred to rely on decent PVR functionality (for example, recording conventional broadcasts using the Sky Q service). Initially offering a basic seven-day catch-up service, which was later extended to 30 days, picture and sound quality of standard definition and high definition programmes through iPlayer have been mediocre at best, with very modest data rates used for content with the best picture quality (up to 5 Mbps). HD content is encoded at 1280 x 720 resolution (at 50fps) rather than 1920 x 1080 used on terrestrial and satellite broadcasts.

It is interesting to note that the new Britbox subscription service, launched in the UK in November 2019, shows BBC (and ITV) HD programmes in full HD resolution (1920 x 1080) with a better bit rate of 8 Mbps. We understand that iPlayer has a high bit rate HD option (8 Mbps), which has not yet been made available, but could be enabled for devices in the future. We hope that improved quality options are made available when iPlayer has its major relaunch later in 2020.

The widespread availability of superfast broadband (with 95% if UK premises now being able to access superfast broadband with speeds of at least 30 Mbps) means that bit rates are no longer the concern they once were. This means that the BBC now has the opportunity to increase iPlayer bit rates significantly on a widespread basis to deliver substantial picture and audio improvements over conventional terrestrial broadcasting, for example, improving the quality of HD programmes and introducing Ultra HD 4k content with advanced surround sound (e.g. Dolby Atmos).

In the face of intense streaming competition, BBC iPlayer is set to see major development over the coming months and years. In a presentation in October 2019, a “new future for BBC television” was presented by Charlotte Moore, Director of Content at the BBC – one where iPlayer is actually at the heart of everything the BBC does. She explained that the recent decision by Ofcom to give permission for all new BBC programmes to be available on iPlayer for a minimum of 12 months was a “game changing moment”. She explained that iPlayer will be the gateway to all BBC programmes, bringing “everything” into one place – covering live and on-demand content. She said, “So much more than a catch up service, iPlayer will become the best place to watch all BBC TV – bringing you live music, the latest news, the big sporting events and all the shows that feel utterly relevant to Britain on any given day, alongside a rich library of boxsets and films.” Without significant improvements in picture and audio quality, we certainly will not be rushing to make iPlayer the way in which we watch all BBC TV, and the evolution of other streamed services offering superior picture and audio quality will continue.

Currently, the BBC is in the middle of Ultra HD trials, which have been focusing on two areas:

The BBC has already used iPlayer to show a range of live events, which have been made available to the general public, including:

BBC engineers have reported back on their progress and findings of their trials, which in general have gone well. We have really enjoyed watching many of these broadcasts and the picture quality has been noticeably better than the HD equivalents. After watching the images produced, we feel there is no going back to an SDR HD picture.

During its 2018 trials, the BBC’s trial Ultra HD coverage via iPlayer receiver over 1.6 million live requests.

For real-time encoding of live events, the BBC has found that a minimum broadband download speed of 40 Mbps has been needed (with a bit rate of 36 Mbps). Engineers hope that, eventually, real-time encoders will be able to match bit rates used for on-demand content, where about 24 Mbps is needed. The BBC has published some of the findings from its trials here:

In addition to its live trials, the BBC has shown a number of on-demand programmes via iPlayer:

In March 2019, the BBC reported that its Ultra HD trials had proved “incredibly popular” with audiences. ‘Dynasties’, one of the most popular programmes on BBC iPlayer, was streamed around 8 million times, and almost 18 percent of these requests (1.4 million) were in Ultra HD. This is an extremely impressive result given the relative lack of awareness that has surrounded the BBC’s Ultra HD trials.

Currently, iPlayer offers the entire season of ‘Seven Worlds, One Planet’ and the programmes look sensational, with picture quality dramatically better than the corresponding HD broadcasts. A broadband download speed of about 24 Mbps is needed for on-demand content (played at 25 frames per second). With 95% of UK households now being able to access superfast broadband with speeds of 30 Mbps or more, the vast majority of BBC licence-free payers are potentially able to take advantage of the benefits of Ultra HD. You can check the availability of superfast broadband in your area, and find the best deals, by visiting our Broadband Deals page.

We understand that the BBC would like to be offering so-called ‘next-generation’ audio such as Dolby Atmos. The BBC’s trials to date have not focused on the audio side of things so let’s hope they can address this in the not-too-distant future.

In June 2019, the BBC reported that “we can expect some great content over the next year or so for our viewing public”. We await with interest further Ultra HD programming and will report its availability on our blog.

How to watch Ultra HD on iPlayer

You can watch Ultra HD in a number of ways, including through a large number of compatible smart TVs. For more information, visit the BBC’s information page:

Can I watch programmes in Ultra HD in my connected TV?