We enjoyed a fantastic Christmas period making the most of the large amount of Ultra HD 4k content that is now available across the streaming platforms in the UK, including ‘Seven Worlds, One Planet’ from the BBC (shown above). High-speed broadband has been making a dramatic impact on television production and consumption. It is allowing a broader range of content to be delivered ‘on demand’ via streaming services, often with better picture and sound quality than conventional terrestrial TV broadcasts. In this blog, we discuss some of the latest developments with Netflix, Amazon Prime Video, Apple TV+, Disney Plus and BBC iPlayer Ultra HD.

We are so excited that the widespread deployment of superfast broadband in the UK has been fuelling a significant enhancement in TV consumer choice as well as massive improvements in picture and sound quality. Streamed video-on-demand services from Netflix and Amazon, offering HDR (High Dynamic Range) Ultra HD 4k content with advanced Dolby Atmos surround sound, have recently been joined by Apple’s new TV+ service, with the Disney Plus service expected to launch in March 2020.

According to Ofcom’s ‘Media Nation: UK’ report published in August 2019, around a half of UK households already subscribe to at least one subscription video-on-demand service such as Netflix or Amazon Prime Video. Ofcom acknowledges that online content delivery and the emergence of global video providers such as Netflix are “driving fundamental shifts in viewing habits and industry structures”. Existing broadcasters such as the BBC are facing a dramatic shift in how content is delivered and consumed. In its most recent annual report on the BBC, published in October 2019, Ofcom reported that the BBC is vulnerable to a rapidly changing landscape, and risks losing a generation of potential licence-fee payers to streaming services such as Netflix. It reported that while Netflix reached almost two thirds of 15-24 year-olds each week the BBC iPlayer reached just 26% of this age group. This challenge to traditional broacasters such as the BBC from online streaming will only get worse. Increased awareness of such services, the entry of new services (e.g. Apple TV+ and Disney Plus) and the increasing take-up of superfast and ultrafast broadband networks will fuel further take-up of such services across all age groups.

The widespread availability of superfast broadband (with 95% if UK premises now being able to access superfast broadband with speeds of at least 30 Mbps) means that bit rates are no longer the concern they used to be and the vast majority of UK homes can now access Ultra HD (4k) streamed services. Increasing availability of higher broadband speeds has been allowing streaming providers to introduce picture and sound quality enhancements.

BBC iPlayer has lost its position, to Netflix, as the most popular on-demand platform in the UK. However, the BBC continues with its Ultra HD trials, recently releasing its complete ‘Seven World, One Planet’ series on iPlayer in stunning Ultra HD quality. Read about it here:

Since launching its online video streaming service launched in the UK in 2012, Netflix has demonstrated an impressive combination of appealing global content and technical leadership. Leveraging economies of scale across multiple markets with its 158 million subscriber base in over 190 countries, it has been widely reported that Netflix has been spending about USD 15 billion annually on content. 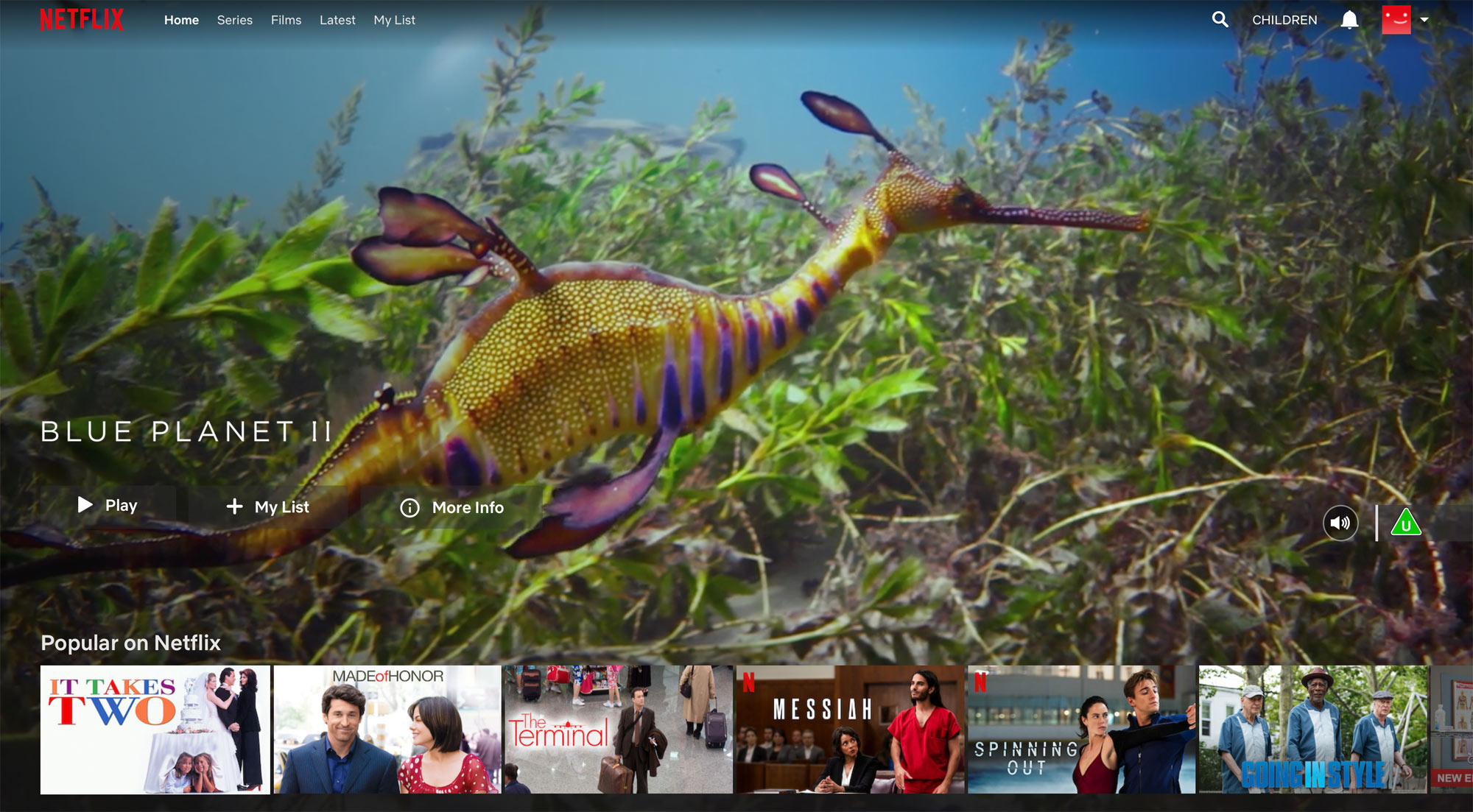 Netflix has continuously innovated with technology. It launched its 4k streaming service in 2014. It then added High Dynamic Range content (increasing maximum brightness levels and the intensity of colours) in 2016. Netflix has not only innovated in terms of picture quality, but has made significant advances with audio too, to offer a much better audio experience than the BBC (with iPlayer or its conventional broadcasts). Netflix introduced Dolby Atmos in June 2017, to provide an enhanced, immersive audio experience. In May 2019, Netflix introduced its “studio quality sound” to its service, substantially increasing its audio bit rates by 71% (from 448 kbps to 768 kbps) for Dolby Atmos soundtracks and by 233% (from 192 kbps to 640 kbps) for its surround sound soundtracks.

Since its launch, Netflix has built up an impressive portfolio of Ultra HD content. Netflix now boasts the largest 4K library of titles including movies, series, and documentaries in 4K resolution. For the full list of available of 4k titles, you can visit the following regularly-updated page:

Netflix has not been the only ‘game in town’ for Ultra HD content. Amazon launched its Amazon Prime streamed video service in the UK in February 2014, introducing Ultra HD (4k) content in December 2014. It added HDR in 2015. Immersive Dolby Atmos sound arrived in August 2018. In the UK, Amazon has attempted to woo subscribers with big-budget Ultra HD shows such as the ‘Grand Tour’ (featuring the ‘old’ Top Gear presenters, including Jeremy Clarkson). We feel Amazon has struggled to compete with Netflix in terms of quality of content and quality of picture and sound. We reviewed the Grand Tour back in late 2016 when the first series was launched:

Netflix recommends a “steady” internet connection of 25 Mbps or higher to stream Ultra HD content. A similar speed is recommended for Amazon Prime Video. 95% of UK households are capable of accessing superfast broadband with download speeds of at least 30 Mbps, comfortably exceeding the minimum requirements of Netflix and Amazon Prime Video.

Most recently, Apple’s TV+ streaming service was launched in the UK in November 2019, and has pushed the picture quality envelope of streamed services yet further using higher bit rates than ever used before with streaming services. Content is delivered in Ultra HD with Dolby Vision (HDR) and with Dolby Atmos soundtracks, and 4k picture quality is even better than Netflix and Amazon Prime. Read our review of Apple TV+ here:

Review of Disney Plus

Although relatively late to the streamed video-on-demand marketplace, Disney brings a huge content catalogue from Disney (including Star Wars) and Marvel. As a possible sign of things to come, Disney amassed a customer base of 10 million subscribers in its first day!

For our new review of Ultra HD on BBC iPlayer, view our article:

2020 promises to be an exciting year, and we will review all developments on our blog.