2021 update: Read our latest blog posts about Sky Q and other TV services 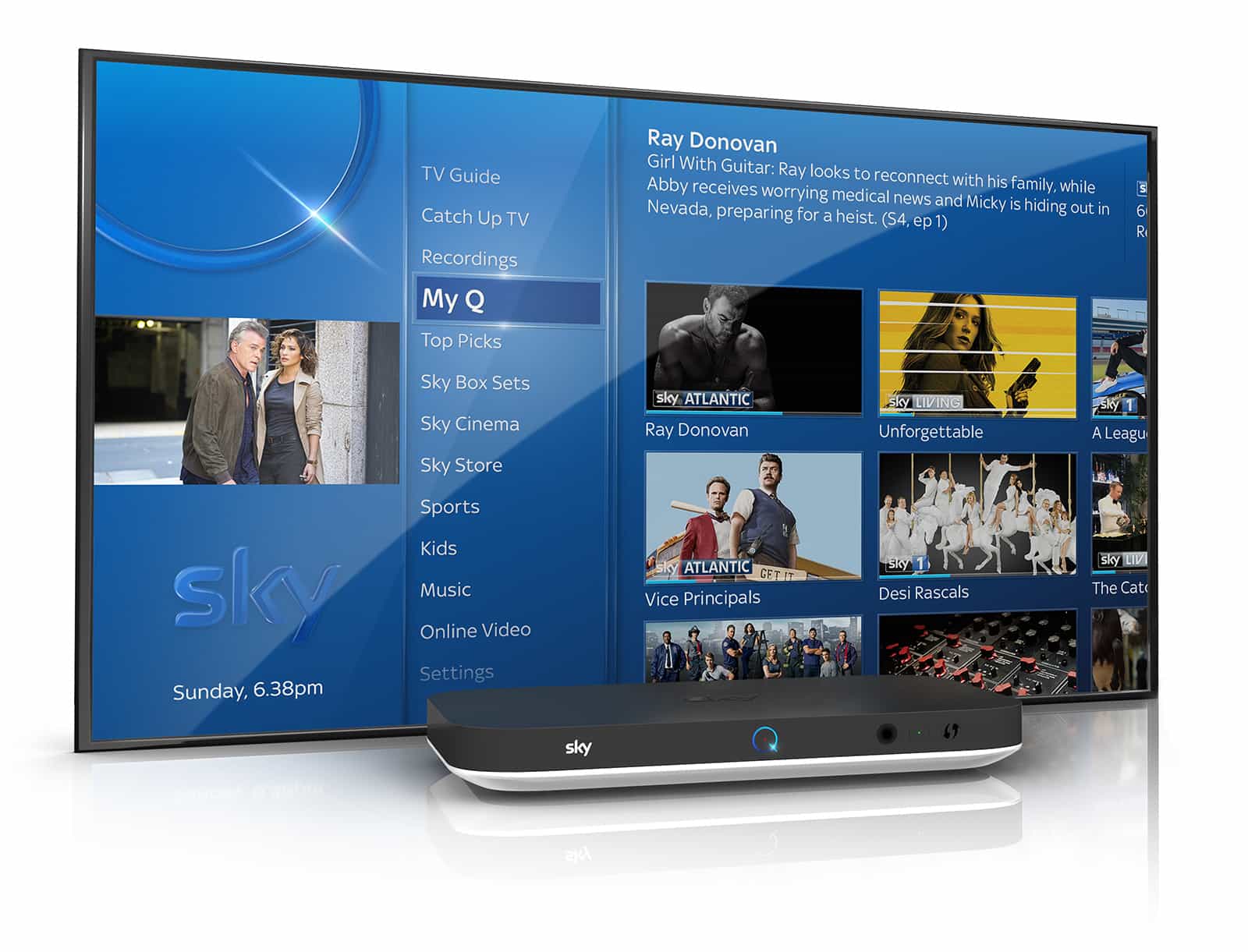 While BT was the first company in the UK to launch a broadcast Ultra HD service, Sky takes the crown for offering the most comprehensive Ultra HD service, which, in addition to football content, includes movies and box sets. The majority of Sky’s Ultra HD content is delivered ‘on demand’ via broadband rather than satellite broadcast. A huge advantage for Sky (compared with Netflix and Amazon Prime) is its use of progressive downloading rather than streaming, allowing users will relatively low broadband speeds to view and record Ultra HD content in all its glory. All in all, it’s a superb start for Sky and has certainly been worth the wait. 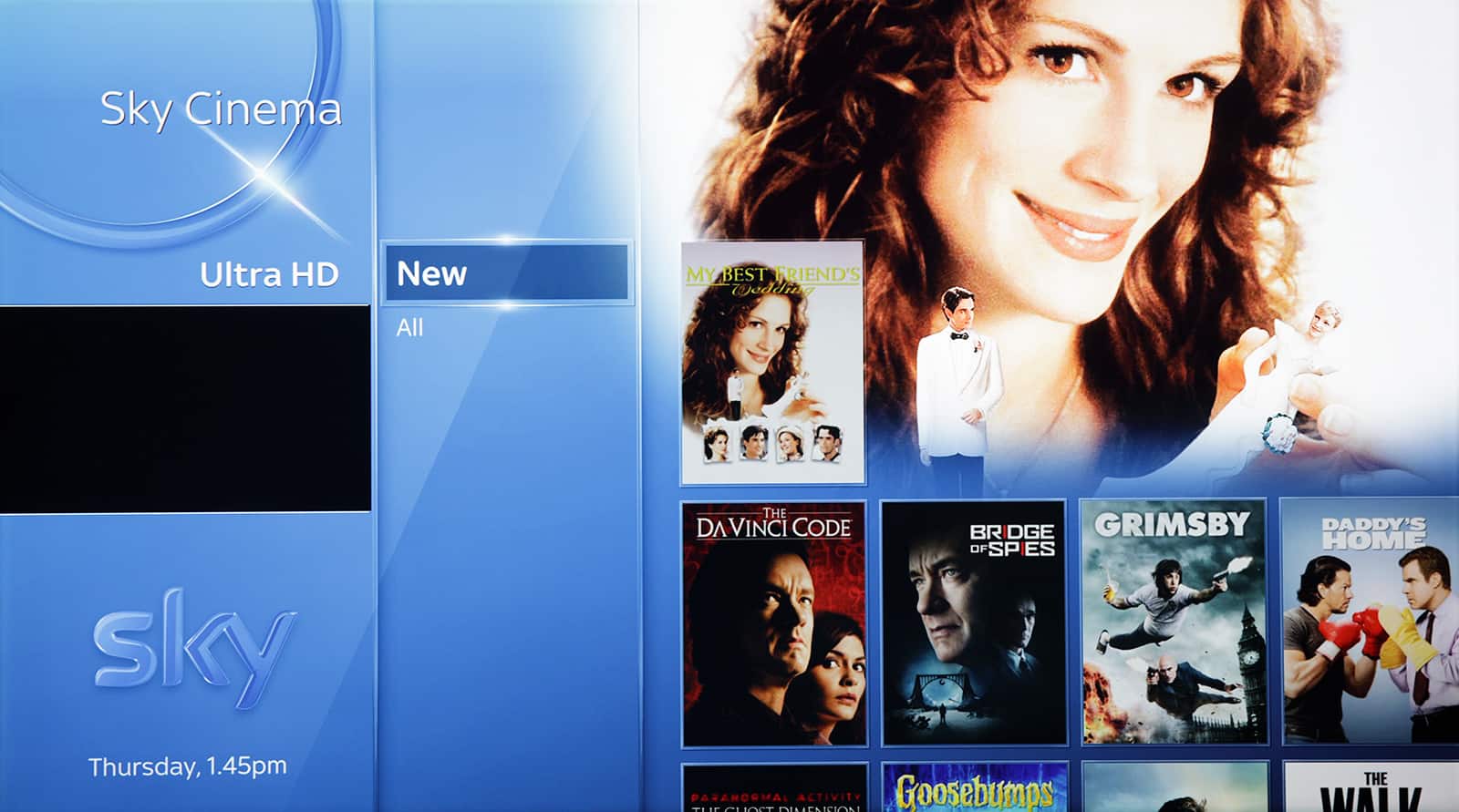 Since the launch of its Ultra HD service, Sky has been gradually adding Ultra HD movies, which can be found in the dedicated Ultra HD part of Sky Cinema.

Since Sky claims to have over 1,000 movies on demand, 41 UHD titles currently represents about 4% of its total movie catalogue. This percentage will clearly increase over the coming months and years. 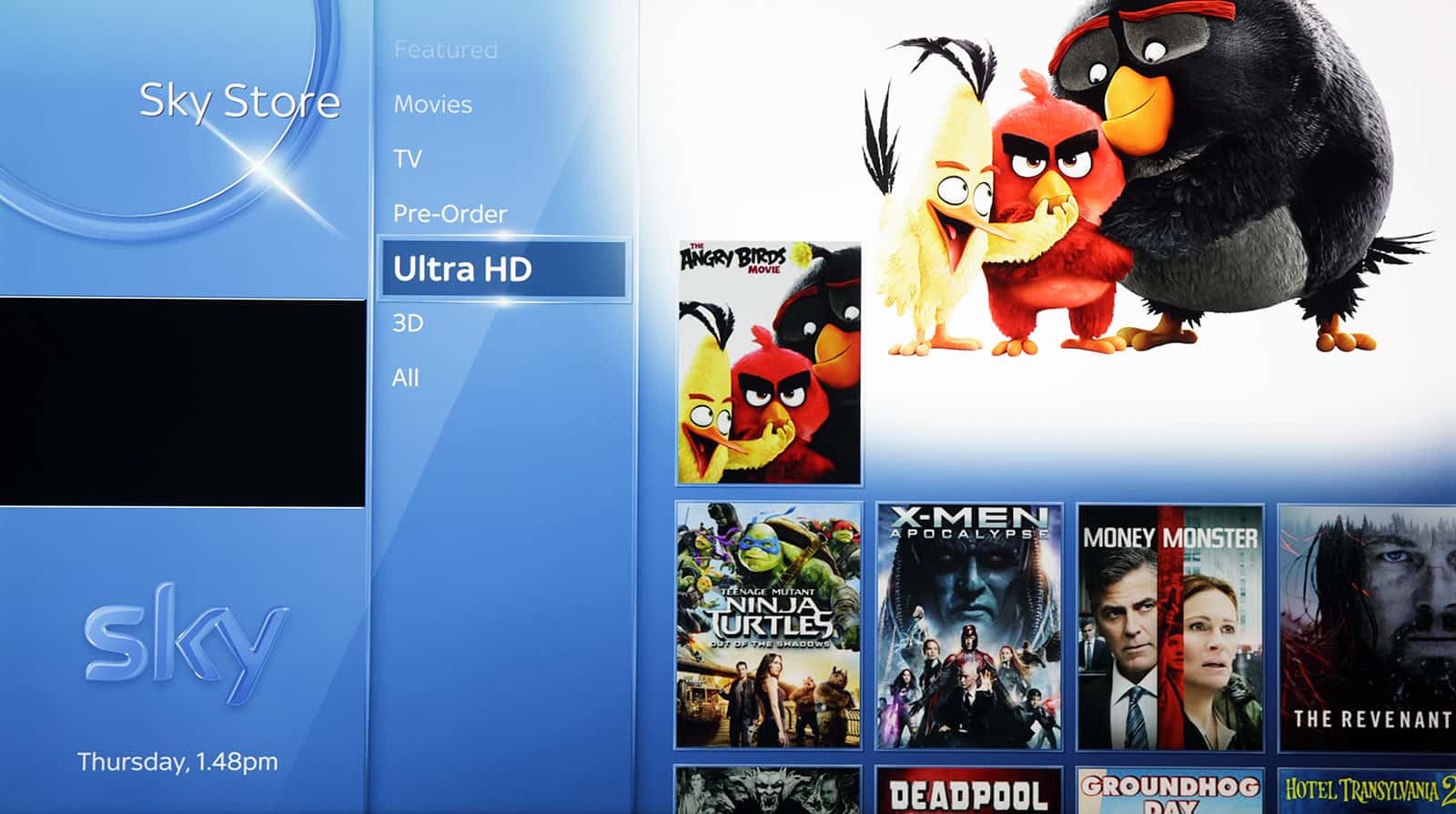 In addition to its Sky Cinema offering, Sky also offers a range of premium ‘on demand’ movies in Ultra HD format for rental. At the time of review, the following seven ‘premium’ titles were available: The Angry Birds Movie, Money Monster, The Revenant, 10 Cloverfield Lane, Risen, Concussion and The Night Before.

Sky offers Premier League football matches in Ultra HD, with Formula One in 2017

As with BT TV, Sky has focused its initial Ultra HD sports coverage on football, with 124 live Premier League games to be shown in the current season. Football will eventually be joined by Formula 1, with every Formula 1 race to be shown in Ultra HD in the 2017 season.

The images from Sky’s football coverage generally look absolutely superb, being similar to the amazing Ultra HD picture quality we have witnessed from BT Sports, and this is not just evident ‘on the field’. Studio footage, for example of presenters and pundits being interviewed, looks absolutely incredible. We cannot wait to see other sports, such as cricket, making the transition to Ultra HD, although Sky has only announced the timescales for the launch of Formula One. 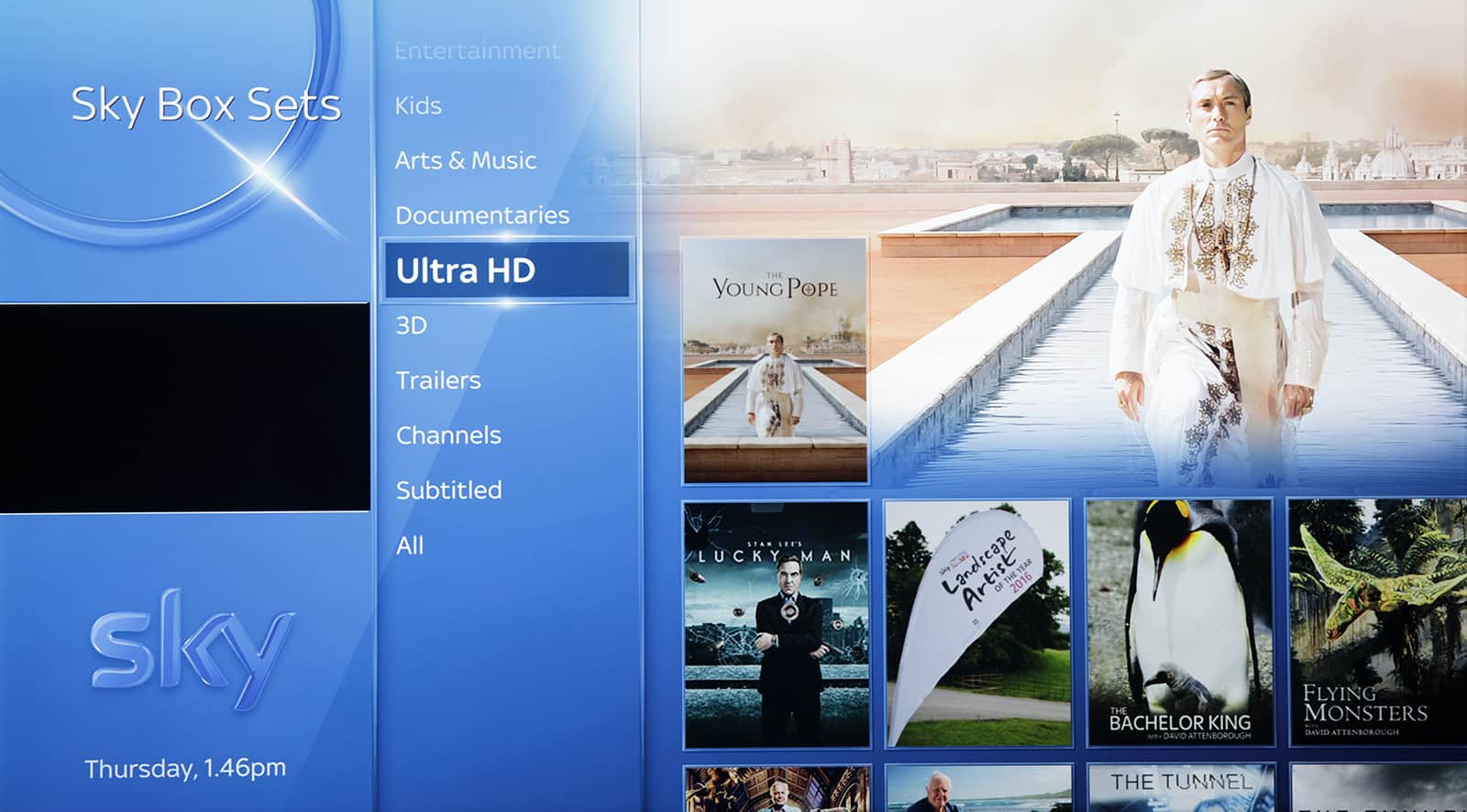 In addition to movies and sports in UHD, Sky also offers a range of other content in the format, and these can be accessed through the Ultra HD section of Sky Box Sets. This includes music, arts and nature programmes as well as traditional box sets.

Some of the UHD content is simply jaw dropping, for example, the recent Sky Arts programme Landscape Artist of the Year 2016. Skins tones look so lifelike, with rich colours and immense detail. The image below was taken of a Sony Ultra HD TV showing the programme by a digital SLR camera. 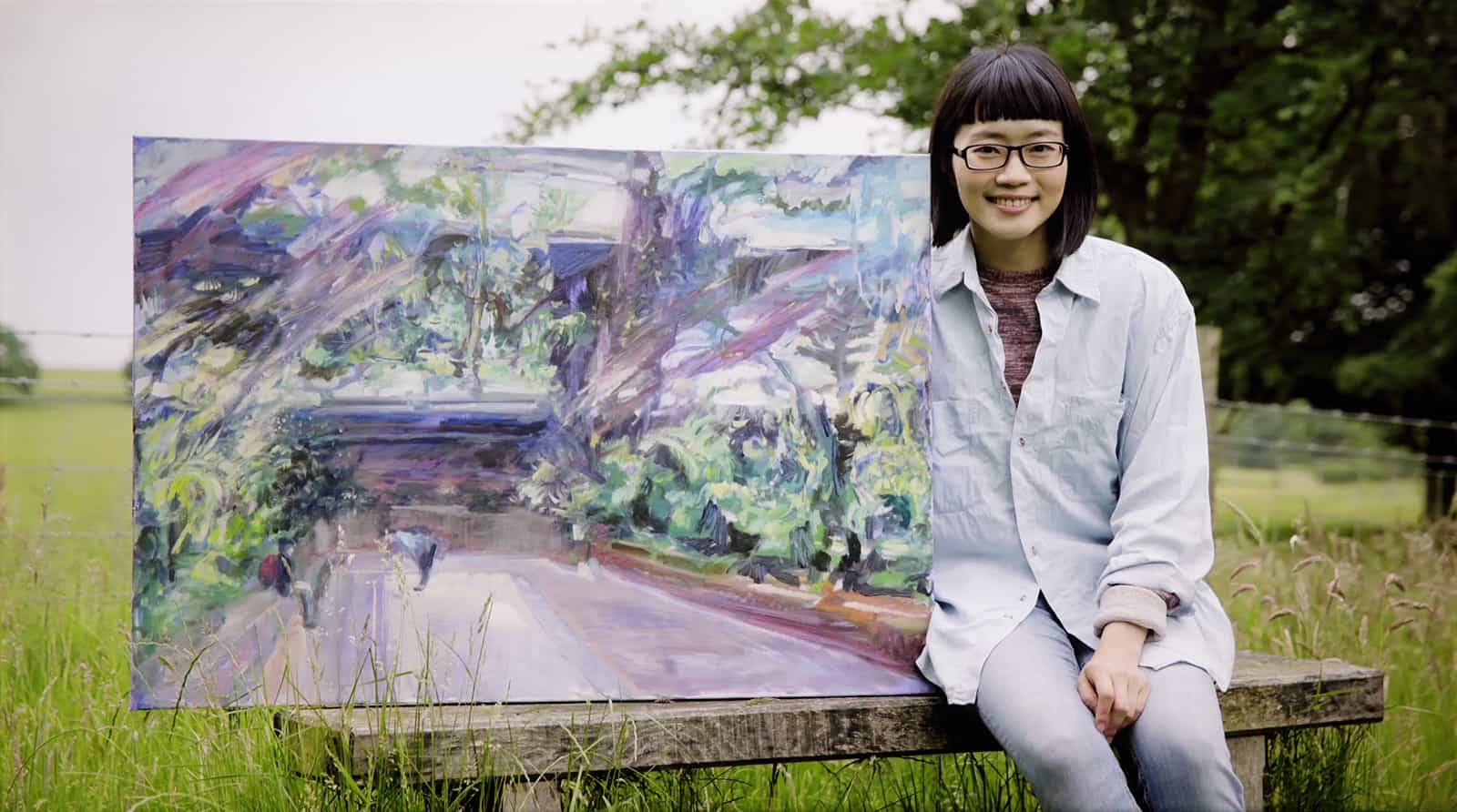 Make sure you have the right equipment, Sky subscription and settings

In order to enjoy the benefits of Ultra HD with Sky Q, you need to:

We have produced a guide that takes you through these steps, which can be accessed by clicking on the following link:

A huge advantage for Sky’s Ultra HD service is its suitability for households that suffer from relatively low broadband speeds.

While other Ultra HD services are available in the form of Netflix, Amazon Prime and BT Ultra HD TV, these all require relatively high broadband speeds to work. Netflix Ultra HD content is streamed at 15.6 Mbps while Amazon’s website states that you need a high-speed Internet connection of “at least 15 Mbps” to watch videos in Ultra HD. BT’s Ultra HD service is even more restrictive. As described in our Review of BT’s Ultra HD (4k) TV Service, BT will only progress an order if the download speed of the line is estimated to be at least about 45 Mbps. This is to ensure that there is adequate headroom above the data rate required to watch the Ultra HD channel (up to about 30 Mbps) to be able to use the broadband connection for other things (for example, recording another HD channel or browsing the web on other devices).

Ultra HD movie titles are encoded at a data rate of about 18.2 Mbps, as shown in the table below. This data rate is significantly greater than the Ultra HD data rate currently used by both Netflix and Amazon Prime.

The Ultra HD encoding rate of 18.2 Mbps is about three to four times the corresponding encoding rate of HD content, meaning that an hour of Ultra HD content will consume about three to four times the capacity of the hard disk in the Sky Q box. A one-hour Ultra HD programme requires about 8 GB of storage, so the 2TB hard drive can store the equivalent of about 256 hours of Ultra HD content. This is more than ample for most users.

Sky currently lags behind Netflix and Amazon Prime by not being able to offer High Dynamic Range (HDR) content. HDR is set to make a more significant difference to picture quality than the higher resolution of Ultra HD. HDR allows a television (or projector) to display a greater range between blacks and whites, while making colours much more dynamic. HDR is already available with Ultra HD blu ray, Netflix and Amazon Prime.

The good news is that HDR has been developed for TV broadcasting, using so-called Hybrid Log-Gamma (HLG) technology. However, it is currently unclear when Sky will commence HDR broadcasts.

BT announced this month that it plans to become the first UK broadcaster to offer Dolby Atmos sound. BT expects to make this sound enhancement available to BT Sport Ultra HD customers in January 2017. BT claims that Dolby Atmos will allow it to offer the “most immersive experience possible”. It is unclear when and if Sky will launch major improvements in sound.

Overall, we are very impressed with the Sky Q Ultra HD service, particularly While BT was the first to market with Ultra HD broadcasting, Sky decided to wait until it could offer a significant amount of Ultra HD content. The use of progressive downloading means that even customers with slow broadband connections will be able to enjoy the substantial picture quality benefits of Ultra HD.