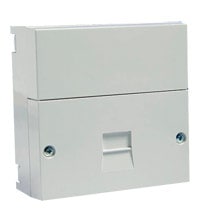 For ADSL and ADSL2+ services, check that BT has previously installed an NTE5 master socket in your property, like the one shown in the image on the left. BT-installed NTE5 units have a little BT logo in the top left of the unit. The NTE5 marks the point at which BT’s telephone cable enters your property. BT Openreach has total responsibility for the telephone network to your property and your NTE5. However, the wiring going from the NTE5 into your property is your responsibility.

Consumers are not permitted to tamper with the core part of the NTE5. However, you are perfectly free to unscrew the faceplate (the front bottom part of the NTE5), for example, to connect extension wiring. Possessing an NTE5 allows you to replace the existing faceplate with a special filtered faceplate (described in our Tip 5). BT has been installing NTE5 units for many years, although some older houses may not have one. In the unlikely event that you do not currently have an NTE5 installed, you can ask BT to install one for you. BT may charge you for this. A cheaper alternative is to fit your own NTE5-style box next to the BT master socket as an extension.

With fibre broadband services, a master socket (with filtered faceplate) will be installed as part of the installation service, if a master socket has not previously been installed (unless you have opted for a self-install option).

Next Tip: Fit a filtered faceplate